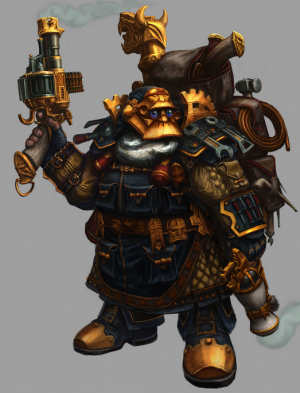 If a Dwarf shows a particular aptitude towards machinery, he may be granted an apprenticeship within the Engineers Guild, whose duty is to provide the Dwarf Holds access with the latest of a long-line of technological advancements. Most Engineers spend much of their time repairing broken components and cursing the shoddy work of the Engineer who first constructed it. They are also responsible for the creation of blueprints or schematics for new potential technology. If the Guild thinks a concept is worthy enough, the Guild will fund the Dwarf with all the equipment, materials and help needed. Most inventions never quite take off, but others, such as the legendary Gyrocopter, quite literally did.[2a]