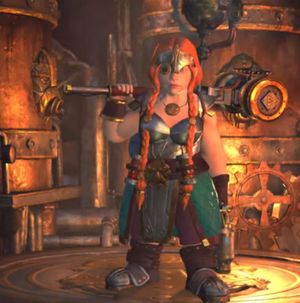 Keela is a Dwarf Engineer from Karaz-a-Karak. [1]

She grew up in the captial city of the Dwarfs and always wanted to be a engineer like her father, Gunnar Torkilsson. [1]

Together with her father, she created many impressive machines befoer he was badly injured in a aircraft crash and for which she blamed herself, despite not knowing reason. [1]

Devasted by shame, she left the hold and her still recovering father, entering the Old World, heading for the human city of Nuln hoping that they would welcome her skills and knowledge at their gunnery school. The empire was torn apart by civil war and the school a shadow of its former self, but the remaining engineers indeed made her welcome. [1]

However she had not long been there when word came of a Chaos invasion and when Magnus the Pious rallied an army, much of the school including Keela brought their guns and knowledge to his army heading east. In the Battle for Kislev's Gate, the artillery proved themselves, blasting away at the Chaos horde until Magnus and his knights defeated their leader, Asavar Kul. [1]

She was lauded as a hero when she returned to Nuln and was invited to join the retinue of the new Emperor. [1]