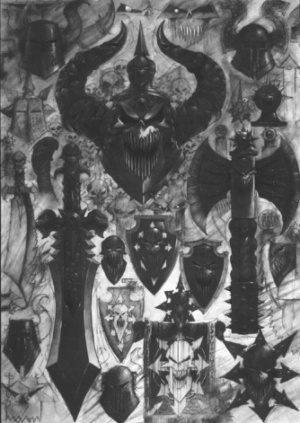 A Chaos Armour is a set of weirdly wrought plate favoured by the Champions of Chaos. While all the warrior peoples of the North wear some form of armour bearing the twisted marks of their unholy devotion, the plate known as Chaos Armour is a very different ilk from the iron and mail favoured by the Norse and Kurgan. Many of these sets hail not from mortal smithies, but from the hellish forgeworks of the Chaos Dwarfs who dwell in the Dark Lands. These Dwarf-forged sets find their way to the North via trade contacts the Chaos Dwarfs have opened in Norsca and in the Eastern Steppes. The tribes trade furs, meat, steel and slaves to the depraved Dwarfs in order to make use of the armour for their mightiest warriors and honoured chieftains. Other sets are blood-encrusted heirlooms of the lines of Norse and Kurgan nobility, said to have been gifted to the progenitor of the line by the Dark Gods themselves. Such sets bear the numerous pitted scars of countless battles, and are festooned with the grim trophies of victory that the Northmen take from the defeated. The Norscans are commonly described as a people with only two talents -- the forging of mighty implements of war and in the spawning of mighty warriors with the deadly will to use them in battle. Such is their skill in the former that some Norscan smiths are capable of forging crude sets of Chaos Armour capable of turning aside a blade as well as the finest Bretonnian alloy. Yet even this, they claim, is exude compared to the sets of armour they have witnessed being forged on the anvils that border the Other Realm. Many Norscans believe that the forging of Chaos Armour and Weapons requires the investment of the smith's very soul into the creation itself. The creation of such other-worldly armour is beyond the capabilities of most tribal blacksmiths, and indeed, all but the most skillful or most reckless actively refrain from such activity, believing the creation of true Chaos Armour to be a matter for none but the gods themselves.

Whatever its make, Chaos Armour provides a level of personal protection matched only by the Gromril Armour of the Dwarfs. Arrows clatter harmlessly against the dark metal, halberds shatter in two when hammered against the sabatons and gorgets of the Chaos Warriors, and even the finest warhammers can make naught but a mild dent when struck against the armour of Chaos. Such is its strength that only weapons of Arcane origins stand a chance of penetrating this hellish plate. Ornate and weirdly wrought, it is forged from unknown materials that seem to writhe and change before a foeman's very eyes. Reflecting in its colours and ornamentation the patron god of its wearer, many Northmen warriors often affix their sets with crude and barbaric talismans that recall the traditions of their own tribes. Many a regiment of Chaos Warriors have gone into battle enshrouded in great cloaks of bearskin and wolf, wearing necklaces fixed with wolf-teeth and the fangs of yet other beasts that are better not to mention. At times, it pleases the Dark Gods to grant these warriors a hellish unity with their armour, transforming it into a second-skin that cannot be removed. Such warriors are regarded as blessed by their compatriots, for they have now fully committed themselves to the warrior's path -- becoming true lords of battle. Those who endure this fate silently rage against what they have become, and throw themselves into battle with the rage of a berserker, desperately seeking death and a release from their prison.

This baroque armour is too heavy to be worn by any man not touched by the breath of the Winds of Change, showing that those that it befitted men who had survived the numberless dangers of the Chaos Wastes.[1]