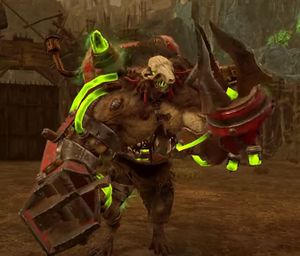 Ghoritch, Castellan of Hell Pit, was a mighty Rat Ogre considered to be one of Clan Moulders greatest achievements, a monstrous Rat Ogre with the brain of a Khornate Chaos Champion.

Ghoritch is Throt's greatest success in the field of translocation of the brain. Like many who are devoted to the Blood God, Ghoritch was once a frenzied berserker who loved the thrill of fresh blood upon him. He served Archaon throughout the Storm of Chaos, but the creed of his bloodthirsty God ran strong in his veins, an Ghoritch led a foolhardy attack on an Empire artillery train, despite express orders not to. His entire tribe were cut down almost to a man.

Though Ghoritch slew a score of lesser men that day and lived to tell the tale, Archaon's punishment was swift and inventive. Like many who had failed him, Ghoritch was sold to the Skaven, Master Mutators to be used for their unholy experiments. Even shackeled and bound with thorned ropes, Throt could see Ghoritch was of exceptional stock, and singled him out for the climax of a series of experiments. The experiment was to be an unparalleled success, transplanting Ghoritch's brain into into the body of a heavily modified Rat Ogre without driving it mad in the process.

Escaping from Throt's laboratory, Ghoritch scrambled his way up to the arena at the heart of the Hell Pit, where fought of a tide of Throt's creations sent after him. His skills did not go unnoticed by the Master Mutators, who recognised his combination of human intellect and Rat Ogre strength as perfect for controlling the more rebellious of their troops. Ghoritch worked his way to become the leader of Clan Moulder's unique standing army. Throt is less than pleased with the meteoric rise of his creation, and works hard with clandestine schemes to bring around the mighty rat Ogre's downfall.