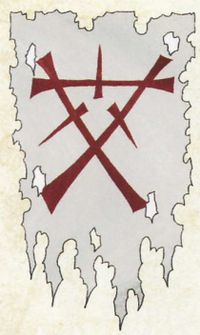 Clan Rictus is a powerful Warlord clan of the Skaven.

Its leader is Warlord Kratch Doomclaw, a member of the Council of Thirteen.Needs Citation

Clan Rictus breeds a prodigious amount of giant, black-furred Skaven [2a], and is unmatched by any other Clan in the number of the elite Stormvermin it is able to field.Needs Citation

The Clan mainly uses Crookback Mountain as a base for slaving and mining operations - capturing Goblins and mining the iron and copper beneath the mountain. From the stronghold, the Skaven also frequently raid Mount Grey Hag and Mount Grimfang for more Goblin slaves. Most of these captives end up laboring in the mines beneath the stronghold, others are used to supply the Under-Empire with slaves, and the rest are simply eaten. [1][2a]

Clan Rictus also undertakes patrols through the Dark Lands in order to retrieve the warpstone meteors that fall east of the Worlds Edge Mountains.Needs Citation They also tax any Skaven wanting to enter the Dark Lands and charge double for those wishing to exit. [2a]

In 2399 IC, a fleet of Skaven submarines commanded by Rictus Warlord Skizratch arrived on the shore of the kingdom, disgorging a horde of ratmen who were met by the spears of the Lothern Sea Guard, killing six waves of the skavenslaves unleashed against them. However this was all as Skizratch had planned and only now did he release his Rat Ogres and Warpfire Throwers against them. Unfortunately for him the Sea Guard held firm and even slew Skizratch but clan warriors remained unrelenting and now Caradryan and his Phoenix Guard arrived to turn the tide, followed be more Sea Guard. No skaven would escape the beach. [3a]

Its stronghold is in the Crookback Mountain in the Dark Lands