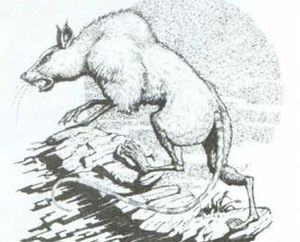 The Wolf-Rat is a creation of the Skaven Clan Moulder. [1a]

As their name suggests they combine the ferocity and power of a Wolf with the viciousness and cunning of a Giant Rat.[1a]

At a distance they can be mistaken for their canine ancestors, but their heads, tails and claws are those of rats. Most are grey or brown, but a few are white or other colours. [1a][2a]

Clan Moulder blended the blood of giant wolves of Kislev into Giant Rats but they proved to so bloodthirsty that they seemed untrainable. Even as they were destroyed, some escaped into the tunnels of the Under-Empire, hunting whatever they could, including the Skaven. [2a]

Despite this, it is said that one or two Master Moulders have managed to capture and train them. [2a]