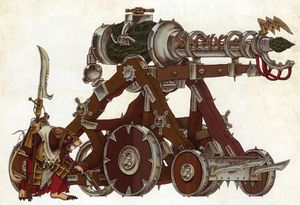 A Warp-lightning Cannon is a war machine of the Skaven. It is the most recent invention by Clan Skryre, the machinery oriented Skaven Clan, and was initially designed by Ikit Claw.

It makes use of a large chunk of raw Warpstone and channels the magical energy through a series of mirrors and lenses to intensify the beam. It leaves the cannon as a green lightning bolt, powerful enough in theory to shatter a mountain. It is moved, aimed and fired by two Skavenslaves and its power output is known to be very unstable and dangerous to handle, as well as difficult to aim properly.[1]

It was invented by the infamous Ikit Claw who also created a smaller version, the Warp-lightning Rifle able to be carried and used by a single skaven. [2a]