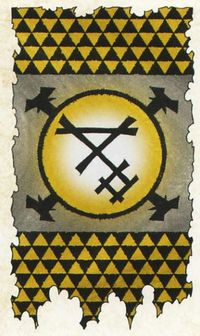 Clan Skurvy is a powerful Skaven Clan that deals with water transport for the Under-Empire. [1a]

The stronghold of the clan is located beneath city of Tobaro in Tilea. [2a]

The clan runs and maintains the barges, scows, piers and warehouses that are vital to trade and the skaven economy. In particular they ensue that food and slaves reach Skavenblight in substantial amounts and before they are spoiled, this gives the clan tremendous reach, power and influence across skavendom - they also conduct piracy. Skaven in the clan often have an affinity for the water, something that seems mad to many others of their race. [1a]

The clan vessels are usually ramshackle affairs cobbled together from salvaged wrecks of other races. [1a] The clan is negotiating with Clan Skryre to supply them with warpsteam engines which would increase the range and power of their fleet. [2a]

All crewmembers are suspected of being part of a mutiny, which is just as well as they are all planning to do so. Crew mark their loyalty to the ship rather than any captain. [3a]

The clan was ordered by the Council of Thirteen to build a new fleet at Spineport to support the attack on the High Elf citadel of Calith on the southern tip of Cathay. [2b]

The elite fighting skaven of the Clan are known as Storm-vermarines. [4]