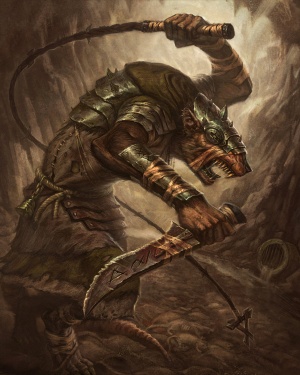 Packmasters are the trainers and handlers of Clan Moulder's various warbeast and hulking monstrosities. [1]

These specially trained Skaven are experts at goading their charges - ferocious, half-mad creatures who can turn and attack with no warning. For this reason, Packmasters are themselves cagey and fierce warriors or, if they are not, they quickly end up as another meal for their merciless packs. It is common practice for Clan Moulder to sell both beast packs and Packmaster handlers to the highest bidder. In this way, Packmasters leave Hell Pit to serve under Warlord clans across the globe. Some clans, not fully trusting Clan Moulder, will buy beast packs but insist on supplying their own Packmasters.[1]

Goading such creatures into battle is an exact science, and many clans who attempt their own handling are soon after savaged by their own rat-beasts. Some few clans, notably Clan Krizzor of the Dark Lands, have an affinity for developing their own Packmasters, but none save Clan Moulder produce enough to sell to other clans. The whip is a favoured weapon and beast-driving tool, and Packmasters quickly learn to become experts with the long lash. A Packmaster is adept at using his whip to direct the feral packs, or, when engaged in combat, to snap the weapon at the enemy - attacking over the heads of Giant Rats or between the hulking Rat Ogres. Those that can afford such luxuries can upgrade their whips to something that delivers even more pain.[1]

In 2nd and 3rd edition WFB they were known as Beastmasters.