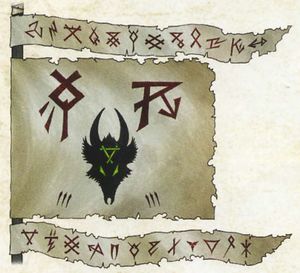 The clan specialises in a bizarre blend of sorcery and science which has produced the insidiously deadly weaponry used by the other Skaven clans. Their weaponry is in much demand by the Warlord Clans. Their monopoly on the creation of advanced weapons has allowed them to rise to become arguably the most influential of the Clans. Clan Skryre is widely reputed as double-dealing and treacherous, selling their weaponry to all sides of a Skaven power struggle.

When Clan Pestilens returned from Lustria and attacked several skaven strongholds, the Council of Thirteen dispatched an army supported by Skryre Warlock Engineers to figh them. [1a]

Around 2300 IC (Imperial Calandar) and as the Second Skaven Civil War raged into its fifth century and Skavenblight itself had become a battleground, Skryre forces led by Ikit Claw[1b] attempted to take full control of the city, using its powerful technology to sieze the temple of the Horned Rat. It deployed Poison Wind Globardiers, Warpfire throwers and Jezzail teams to secure its prize and Morskittar declared himself ruler of the capital. This had little or no effect on the ongoing war. [1a]

They held Skavenblight for the next few centuries until the Grey Seers sought to end the war by summoning the Horned Rat itself. [1a]

The current leader of Clan Skyre is Lord Morskittar, a member of the Council of Thirteen.[1a] His main agent is the Chief Engineer Ikit Claw.[1b]