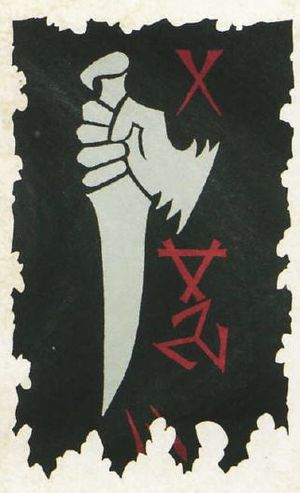 The banner of Clan Eshin

In the ancient past Clan Eshin travelled to the east, led by Grey Lord Visktrin who had been mortally wounded by a Dragon in the Mountains of Mourn, following his death his successors took the clan beyond the knowledge of the other skaven and for centuries its fate was unknown. [1a]

It travelled further and further to the east, establishing themselves under Ind, Cathay and Nippon. Studying the surrounding human civilizations, it learned the arts of stealth, infiltration, and assassination.

At the height of the First Skaven Civil War Clan Eshin re-established contact with larger Skavendom, offering its loyalty and services to the Council of Thirteen. This act largely decided the fate of the civil war.

Its adepts were able to infiltrate any Skaven fortress. It was through the adepts of Clan Eshin that the Council of the Thirteen was able to to assassinate several rebel Warlords. Most of the remainder saw the wisdom to change their allegiance towards the council.

During the Second Skaven civil war Clan Eshin remained neutral and sold its services for the highest bidder.

In the year 1999 the Nightmaster of Clan Eshin sent Assasin adepts along with their lackeys into the ruined city of Mordheim. Devastated by the comet that hit it, the city was littered with fragments of the comet, which happened to be made of warpstone- a precious green meteor rock charged with the power of chaos, able to sap the strength from the strongest men, mutating them and unlocking alchemical properties within. Skaven currency- warptokens, were made of the raw stuff of this. The Nightmaster was keen to keep this a secret and sent in Assassin Adepts quietly so as not to alert the other skaven clans of this new source of wealth and to keep the prize for himself.

Warbands of Skaven would be led by an Assassin Adept along with his henchmen the Black Skaven; Black furred killers that in other clans would become Stormvermin, but inside Clan Eshin, they become skilled martial artists, expert at stealth but with ferocious strength to back up their abilities. Eshin Sorceror's would often join warbands, ordinarily their jobs were to manufacture magical weapons for the clan such as weeping blades, but in Mordheim, they wanted access to the warpstone first hand and their simple spells were welcomed by the Adept leaders. Night runners were the new fresh recruits. Verminkin made up the bulk of clan Eshin warbands; clanrats aspiring and training to be Assassins. Clan Eshin also had good relations with Clan Moulder at this time, as Giant rats were often seen and some wealthy but paranoid Assassins were spotted with the not too stealthy bodyguard of a Rat Ogre with accompanying them.

Veskit, high Executioner of Clan Eshin was also dispatched to Mordheim, a talented assassin and favourite of the Nightmaster he was rebuilt by Clan Skryre, their part technological, part magical implants turning him into a walking arsenal, unfeeling, without pain, heavily armoured and always looking for prey with his unblinking bionic eye. Veskit's remit from the Nightmaster was to deter the man-things from the city of Mordheim, a job he does by hunting down every one he comes across and mercilessly executing them.[2a]

The main assets of this clan are its trained murderers.

It can also draw upon its hidden Eshin Sorcerors.

Many warriors of the clan blacken their blades with soot to avoid any glints giving away their position. [3a]