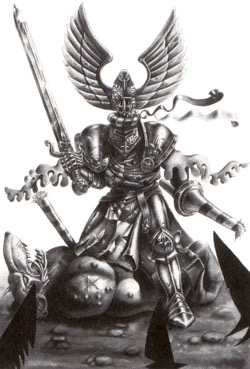 Sir Maraulf once known as the Holy Knight was a noble Questing Knight of Bretonnia, who later became a deadly Vampire feared as the Dark Knight.

Maraulf was once a Marquis of Aquitaine, but a plague had ravaged his lands and killed his entire household, leaving behind title and land Maraulf became a Questing Knight, forever searching for the Lady's favour.

For years Maraulf searched for the Grail, but eventually discovered that it was not his destiny to sup from the artefact. Instead he became a hero in his own right, protecting the village of Mercal and becoming the Custodian of Chapel Sereine. Despite never supping from the Grail, Maraulf's sheer devotion and skill allowed him to slowly form a retinue of Battle Pilgrims, who not only assisted in his protection of Aquitaine's holy chapel but also looked to him as a paragon of chivalry.

When the Blood Knight known as the Red Duke escaped after centuries of imprisonment, one of his first targets was the village of Mercal and the Chapel within. The Holy Knight rallied his band of pilgrims and valiantly attempted to protect his sacred watch against the vampires forces, but was ultimately overwhelmed after fighting the Duke's Wight lieutenant Sir Corbinian. Lying broken and bleeding from a mortal wound, the Red Duke was impressed by his valour and skill granting him the Blood Kiss and transforming the once pious Maraulf into a fearsome Vampire.

Once turned, the man known as the Holy Knight was no more, he was now dubbed the "Dark Knight" and served as the Red Duke's chief lieutenant. His armour and tabard were as black as midnight and he was now far mightier than he had ever been in life. Riding at the head of his undead army the Dark Knight was still freshly turned, meaning that sunlight was not enough to truly weaken or kill him, instead his pitch black armour produced black smoke and a smell of burning flesh as the vampire rode on, unfazed by the immense pain it caused and only focused on his service to a new master. Maraulfs army soon encountered that of Sir Richemont's, the heir to the dukedom of Aquitaine, it was against these foemer allies that Maraulf would test his new power. The Dark Knight slaughtered a score of Richemont's knights, his superhuman strength and speed cutting them down with ease, his undead mount never tiring.

Richemont and Maraulf engaged in a brief duel, but despite the vampires skill Richemont's sword had been blessed by The Lady within a chapel and proved to be a deadly anathema to the newly risen vampire. The Dark Knight cried out in pain and managed to wound the young Questing Knight before fleeing with the remnants of his forces.

The Dark Knight would participate in the final battle for Ceren Field, leading part of the Red Dukes forces against Duke Gilon and Richemont. After the death of Gilon, he and the Red Duke breached Ceren Fields ancient tomb, and attempted to use the power of its occupant to their advantage, an ancient Grail Knight. This plan backfired, with the dead knights power burning Maraulf with holy light, weakening him so much that his skills were no longer superhuman. He would eventually meet his end at the hands of a Knight known as "Sir Leuthere", despite his weakened state The Dark Knight was still beyond any mortal warrior and was nearly able to defeat Leuthere, had the holy power of the tombs occupant, Galand not empowered him to destroy the vampire.

1. In the Original Circle of Blood supplement, the Grail Knight known only as The Holy Knight was present instead of Maraulf, this was later retconned in the Novel, giving him a name and making him a Questing Knight instead.

2. In the Original Circle of Blood supplement, the Dark Knight was a Wight who served as the Red Dukes Lieutenant, this was later retconned in the Novel, making Maraulf take his place in title and creating Sir Corbinian to take the role of Wight instead.