From Warhammer - The Old World - Lexicanum
(Redirected from Wight)
Jump to: navigation, search 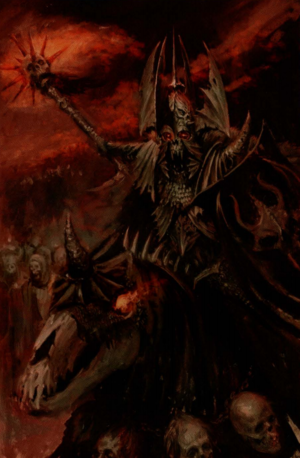 All across the Old World there can be found the tombs and cairns of the ancestors of men. Atop rocky hillocks, within forest groves and high in the mountains, those cultures that once lived in what is now the Empire entombed their greatest leaders in mighty barrows. Charms of protection were laid upon these tombs to ward away grave robbers and scavengers. Crude runes were carved into the lintels of the graves, and amulets and talismans were hung from the walls. Some of these still hang in place, a testament to the magic they contain, though many of them have been defaced, stolen or destroyed by the creeping minions that serve the Vampire Counts. Others are unaccountably changed by the dark energy that seeps through the earth, and now bear grim symbols and the face of death itself.[1]

Not all of these warded tombs lie silent. Some were built in areas where Dark Magic flows and gathers. In these accursed places, the incumbents rest uneasily, their souls flickering between the world of mortals and the realm of the afterlife. When the flow of Dark Magic grows strong enough, the ancient warlords rise from their crypts as Wight Kings, eyes glowing with unnatural life. Even for those prehistoric kings who lie in relatively safe tombs, there is not always the eternal rest for which they yearn. Determined Necromancers and Vampires endeavour to break open the seals of the ancient cairns and use their magical powers to direct baleful energies inside, resurrecting the dead within and enslaving the entombed lords to their will.[1]

The chieftains of the ancient tribes were buried in their full ceremonial panoply, with bronze breastplates protecting their ribs and winged helms framing their grinning skulls. The tribe's shamans placed the best swords, axes and spears in the dead grip of the ancient kings as they were laid on their slabs. The interior walls of the barrows were painted with scenes of the leader's life, so that should they awaken, they would be reminded of their greatest deeds and most heroic victories.[1]

In the mountain range known as the Vaults, savage tribes of men wage war upon the monsters that haunt the peaks. In caverns hidden from beast and storm, they bury their honoured dead in the fashion of the ancients. Every year, the tribesmen return to pay homage to the chieftains of the past, and every year, there are always a few who are no longer in place. These waking dead walk the lands once more, the tattered remnants of their majesty bound to the service of the lords of the night.[1]

Wight Kings are incredibly powerful Undead, almost as hard to destroy as Vampires. Suffused with Dark Magic, a Wight King's weapons shimmer with baleful energy. The merest touch of their spear tip or blade can drain the life from their foes, or slice through flesh and bone with an ease that is frightening to behold. Clad in ancient armour, their flesh all but withered away, there is little for an adversary to cut or stab. Even to stand before one of these skeletal warriors of antiquity takes an extreme effort of will. For these reasons, a Vampire will often charge a Wight King with carrying forth the Undead general's personal banner. Such a duty is often integral to the army's stability, and these indomitable Undead warriors are able to hold aloft the army standard whilst tirelessly striking down one foe after another.[1]