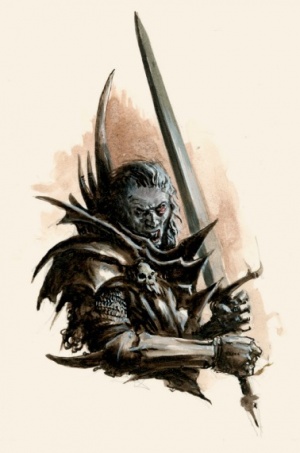 A particularly large and dangerous Blood Knight, Anark was perhaps the most ambitious vampire of Mannfred's get still surviving. He served as Grandmaster of the Drakenhof Templars, the greatest Blood Knights outside of the infamous Blood Keep itself.

Anark was set at Arkhan's side by his father-in-darkness. His chief mission was to ensure that the liche was not destroyed until after Alkanash was recovered. Anark entirely understood Mannfred's wishes. He would safeguard Arkhan during the Bretonnian campaign – beyond that, it would depend very much on whether or not the liche had outlived his usefulness to the von Carsteins.

Anark took part in the final battle of La Maisontaal, slaying Duke Theodoric of Bretonnia before the warrior could kill Arkhan himself, receiving a grievous wound from the Duke's blessed axe. Despite saving Arkhan, it was merely because of his usefulness, when Mannfred finally deemed Arkhan unneeded, Anark engaged the Lich in combat. Despite his raw power and sheer strength, the Blood Knight was defeated when the Lich shattered his sword with unholy magic. Even after having his head impaled by Arkhans staff, he still survived, needing to be dragged and chained to a statue, left to die by sunlight.