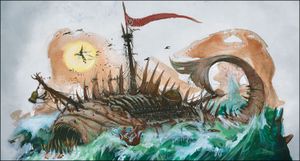 In life it was a Orb Leviathan, a huge sea monster that lured and devoured a Clan Skurvy pirate fleet. [1a]

However some the Skaven within the beast survived, and devoured the monster from the inside, but still trapped they all eventually died and the gigantic body drifted into the Galleon's Graveyard. Count Noctilus saw great potential in such a creature and cast a spell to animate it in his service, not realising that he was also reviving the skaven within it. Perhaps due to the warpstone that suffused the Skaven Pirate lord, the ratmen retained their free will and when the Vampire tried to take cotnrol of them in turn, they sounded their Screaming Bell to drown put his mental comamnds and opened fire with their Warp-lightning Cannons.[1a]

Impressed by the power of the Skaven weapons, the Count called for a parlay and they struck a bargain - the vampire would supply warpstone to the Skaven in exchange for their service. [1a]

The interior of the corpse is filled with scaffolding supporting brass spheres which spark with warp lightning which in turn powers the batteries of Warp-lightning cannons mounted on the ribs. Where once the Orb had a glowing lure, the Skaven has mounted a Screaming Bell that rings out in the night promising salvation to the lost. [1a]