Knight of the Realm

From Warhammer - The Old World - Lexicanum
(Redirected from Knights of the Realm)
Jump to: navigation, search 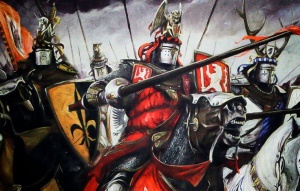 Bretonnian Knights of the Realm.

Knights of the Realm are Bretonnian nobles who have proved their skill and chivalry by completing an errand as a Knight Errant. They form the backbone of the army of Bretonnia.[1c]

Becoming a Knight of the Realm

Once a Knight Errant has proved himself worthy of his station, he is confirmed as a Knight of the Realm. Knights of the Realm make up the bulk of the nobility of Bretonnia and command great respect both for their station and for the deeds they have performed to reach it. Upon his investiture, the knight is given the responsibility of administrating a domain – generally a few acres of land, a village and a castle. As the common folk in the domain are bound to the service of the knight, to work his land and pay their taxes, so too does the knight swear fealty to the higher orders of nobility. [1b]

Life of a Knight of the Realm

A Knight of the Realm is duty-bound to defend his people and his land until death. As a noble trained in the arts of battle, a knight is expected to defend himself and his domain against minor threats without assistance from others. If the situation is more desperate, the knight may either marshal the peasants of the village to fight with him, or instead shelter the commoners in his castle until help arrives from neighboring domains. If a large force attacks his domain, he may also call upon other Knights to aid him. [1b][3a]

Above all, a knight is required to maintain the standards of knightly honor, obeying the strict tenets of Bretonnian chivalry. Amongst the most important of these is to respond to the call to war, when he will fight alongside other knights, not as a rite of passage as he did as a Knight Errant, but as duty required by his station. For a knight there is no greater shame than to fail in these responsibilities, thus betraying the chivalric code. If he does so, he may be stripped of all titles and rights, and be banished from the realm until he can prove himself once more.[3a]

A Knight of the Realm is truly the epitome of what it means to be a knight. Those who manages to hold his domain for many years may end up with a retinue of Knights Errant, which might include his own grown up sons. Since the time of Gilles le Breton, it has become common practice for a Knight of the Realm to relinquish his castle and domain to his son when he has accomplished his errand of knighthood. The senior Knight then sets out on a grail quest and becomes a Questing Knight. If there are several sons, the eldest and first to accomplish his errand of knighthood succeeds to the domain. The others on accomplishing their own errands can be given a portion of the domain if it is large enough. This will usually be a tract of wild land on the margins of the domain, perhaps still waiting to be conquered and settled. [1b]

The errand of knighthood might actually be to conquer the land and hold it long enough to build a castle and settle down with peasants. In this way, new domains are constantly being calved out of the wilderness while the Orcs and other enemies are kept under pressure. If there are no suitable lands to be assigned, it is customary for the younger sons to relinquish their claims to a castle on accomplishing the errands of knighthood and either join the retinue of a Duke or Baron, or set out upon the grail quest straight away.

When new lands are conquered, it is better to carve out new domains for a Knights Errant than to enlarge an existing domain, as it is difficult to defend a domain when it becomes too big to properly manage. The simple fact is that a domain is most easily defended by a single Knight if he can see all of it from the highest tower of his castle and can ride all around its boundary in a single day. It is also good if his neighboring Lord's castle can be seen from the tower of the Knights own castle, so that the Knight may signal for reinforcements and give out warnings of a possible invasion force entering his Lords domain.

When on the battlefield, a Knight of the Realm forms up around others of similar status and forms the bulk of most Bretonnian cavalry squadrons. Though their Errand quest are done, a Knight of the Realm is still all too eager to show their mantle in battle, and would gladly face the toughest enemy opponent to prove such a point. As the staunch backbone of the Bretonnian knightly forces, they are skilled and deadly in combat, with stout lances setting their enemies to flight with a single, determined charge.

A knight that achieves his errand may adopt one or more balzons that are appropriate to the task completed - so a dragon may be shown if the slew such a beast. This is superimposed on to the previously simple heraldry on the lance pennant, shield, surcoat and warhorse barding and a appropriate helmet crest may be added. [1a]