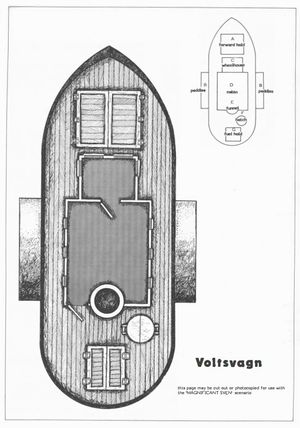 The Voltsvagn is a Dwarf river steamer created by Sven Hasselfriesian. [1a]

The vessel is named after Svens mother. [1a]

Arriving in Lustria after being thrown out of the Engineering Guild, Sven spent three years building a engine and then commissioned Norse craftsmen to build a hull. For the next twenty years he made good money taking cargo and passengers up and down the Amoco River and it’s many tributaries. [1a]

One such passenger was Riolta Snow who hired Sven his crew and ship to for a hunting safari up the river. Shortly after Sven was approached by Haarld Havangatt seeking aid to protect the village of Vastervik on the Ljunger River. He enlisted a small force and took the Voltsvagn to its aid. [1a]