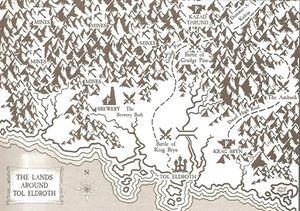 Map showing Tol Eldroth and the nearby lands

In the reign of Caledor II, Lord Eldroth of Lothern sailed forth to create a new colony - he discovered a natural harbour and began to build a port and trading settlement. [1a]

As they ventured inland and scouted the nearby mountains they discovered that they were inhabited by the Dwarfs with the nearest hold being Krag Bryn. Their Queen, Helgar Longplaits welcomed them and trade was established between the two peoples with the elves paying much higher prices for gold, silver and gems than the dwarfs could obtain from their own people. In addition, the hold had a long standing feud with another nearby hold, Kazad Thrund who charged huge taxes on merchants travelling to the interior and wre angered by the arrival of the elves. [1a]

When a rebellion against Helgar began with the Master Engineer Krudd Mad-Mattock who pledged himself to Drong forcing the Queen to ask Tol Eldroth for aid. The elves responded by sending a force under Fendar which resulted in the Battle of Grudge Pass. [1b] Following the defeat of Krudd, Drong and Helgar made peace and following their subsequent marriage, the road was opened for trade by the city to other Dwarf Holds. [1c]

However all was not well between the two elder races with minor conflicts that would lead to the War of Vengeance were growing and when Grung, a Runesmith arrived and questioned the trade - Is it fitting for a Dwarf such as Drong to make Elves rich? Worried about the influence of the Runesmith on her husband, Helgar sent word to Tor Eldroth who responded by ambushing him whilst travelling on the Dwarf Road. [1c]

This act only led to more strife between the Dwarfs and once again Helgar called upon her elvish allies, this time to seize her husband’s Brewmaster and his brewery. [1d] Drong himself gathered his army at Karad Thrund and marched on the city, determined to drive them into the sea once and for all. Well informed, Lord Eldroth formed a Council or war with his own nobles and also some such as Lord Ardath who had been drive south from conflicts with the Dwarfs in the north. [1e]

The Council voted for war and bolstered by additional warriors recently arrived from Ulthuan they marched out to meet the Dwarfs on the field of battle. [1e]

They imported Silks and Wine for Ulthuan to trade with the Dwarfs. [1a]