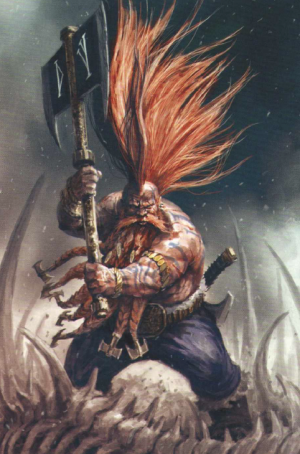 The first Slayer is said to be Gudrun, the best friend of King Skorri Morgrimson of Karaz-a-Karak and who tasked him with protecting his son Furgil as he wnet into the lower halls of Karak Ungor. Attacked by Night Goblins, Gudrun slew sixty of them, but the prince was carried off by a Troll as the warrior was knocked unconscious. Awakening, he tracked the best to its lair and beheaded it but dsicvoered the prince was already dead. Ashamed, he dyed his hair orange to honour the fiery red hair of the young prince and swore an oath to kill every troll he could find. [3a]

Slayers are the strangest and most deadly of all Dwarf warriors. They are outlandish doom-seekers, individuals who have wholly dedicated the entire fiber of their being to the hardest and most destructive life of battle that they can possibly find. Dwarfs are a proud people, and none of them cope well with failure or personal tragedy no matter how small. The loss of a single family member or a hoard of treasures is inconsolable to a Dwarf, a fate that can seriously unhinge their obsessive minds. Eventually these burdens become far to heavy to bear, and a Dwarf would eventually snap, making him forswear the fellowship and comforts of family, clan, and hold, opting instead for a life of self-imposed exile. Having broken ties with everything they once held dear, these Dwarfs leave behind all possessions save for their own axes.[1a]

The life of a Slayer is a solitary existence of battle after battle. Most Slayers would die upon their first or second battle against their enemies, but those that survive these battles are considered the unlucky ones. Whether by their sheer martial skills, toughness or determination, these Dwarfs, though unsuccesful in their quest, have inadvertently been moulded into a magnificent warriors. This natural selection weeds out all but the most exceptional of their kind, meaning that any Slayer met is most likely psychopathically dangerous. As a Slayer continues to carve a massive toll of beast upon his axe, they often take the names of the beast they slay. Such names includes becoming a Trollslayer, or a Giantslayer. The greatest of these already formidable warriors are the infamous Daemonslayers or Dragonslayers, warriors who have managed to survive the encounter with two of the most ferocious creatures to ever live, slaying it and surviving to tell the tale.[1a]

In times of war, Slayers would often arrive from the wilderness to join a Dwarf throng into battle, lending their considerable combat skills in an effort to further the Dwarf cause. Many desperate wars have been won by the ferocity and sheer determination of these Slayers. Even when bloodied and battered after battle's end, they will pause only long enough to slake their thirst before beginning their deathquest anew. Probably the greatest Slayer to have ever lived is Gotrek Gurnisson, bearer of the legendary and revered Axe of Grimnir and a Slayer that has killed the greatest number of enemies known in Dwarf history.[1a]

Some Slayers, despite their best efforts to find and fight the most formidable of foes, still fail at their task of dying in battle. By dint of constant fighting, these rare Slayers become ever more scar-riddled and dangerous. In order to survive for so long against such terrible odds requires either luck or martial skills that have been honed to a razor’s edge, and perhaps both. Now known as Dragonslayers or Daemonslayers, these angst-ridden fighters are honour-bound by their oaths to continue their death quest, but now they must seekout and battle ever more ferocious enemies.[1a]

A Dragon or Daemon Slayer is often joined on his journeys by a swarm of younger brethren from the Slayer cult. They flock towards such renowned killers, as they can be assured that, as he seeks his ultimate destiny, he will lead them straight towards foes against whom a worthy end might be made. This attraction is not altogether appreciated by the irascible and laconic Dragon or Daemon Slayer, for while they realise word of their deeds or great death might now be brought back to the Dwarf holds, they are loners by nature and resent any distraction. They are committed to die gloriously fighting monsters, not to leading others or looking after newcomers. Also, although none would ever admit to it, these veteran Slayers do not want to dare chance one of their following of new mavericks getting in a lucky stroke and robbing them of the glorious final blow upon some epic beast whose death would be worthy of a song.[1a]