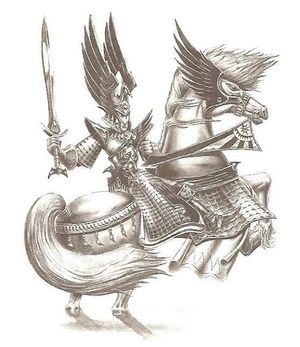 Lord Eldroth was a High Elf of Lothern who created a city, Tol Eldroth in the reign of Caledor II . [1a]

In the reign of Caledor, Lord Eldroth set sail from Ulthuan with many followers and kin to create a city in the new world (now known as the Old World). He landed at a natural harbour and began to build a port and trading settlement which he named Tol Edroth. As it grew, Eldroth sent out scouts and they discovered that the nearby mountains where inhabited by Dwarfs, centred around two holds, Krag Bryn and Kazad Thrund which bore grudges against each other. [1a]

Lord Eldroth sent emissaries to the nearest, Krag Bryn who discovered that it was ruled by Queen Helgar Longplaits who gave them a cautious welcome and Eldroth himself travelled to her court to forge a trading alliance. Once there she welcomed them, even though they had come to her shores uninvited and if they recognised her as High Queen she would accept their tribute and grant them subsidies in return. Peace and trade ensued between the two peoples. [1a]

However, this new trading relationship was noticed by King Drong whose ancestors had sought to take Krag Bryn and he sought to ferment rebellion in the mines that were peldged to Helgar. She asked for aid from Eldroth and as perhe dispatched a force to the mines, attempting to block a force headed for Krag Bryn. [1b]

Following this battle, peace again returned for a time with Drong through a campaign of letters and gifts managing to placate Helgar and when he was finally invited to a great feast he proposed to her. To the relief of both Dwarfs and Elves she accepted and peace reigned again with Tol Eldroth now gaining trading access to more Dwarf holds further inland via the Dwarf Road. [1c]

However the early skirmishes of what would become the War of Vengeance were starting an a bitter Runesmith visited Krag Bryn and asked Is it fitting for a Dwarf such as Drong to make Elves rich?. Angered, Helgar again asked Eldroth for aid to rid her of the trumblesome Runesmith and he dispatched a force to ambush him. [1c]

Drong stormed out of Krag Bryn when he learned of this and Helgar seized his Brewmaster, once again calling upon the elves for soldiers to secure the brewery from the Dwarfs of Kazad Thrund. Eldroth sent Lord Ardath the Vengeful, himself eager to strike back at the Dwarfs who destroyed his home. [1d]

Finally, Drong gathered all his warriors and marched on Tol Eldroth, but its lord had been alerted by spies and agents and gathered a council of war to decide on how to respond. The city had also been reinforced by warriors from Ulthuan and others such as Ardath who had been driven from their own settlements. All present agreed to respond in kind, mustering a mighty force to meet the Dwarfs in what would become known as the Battle of Krag Bryn. [1e]

In the battle, Eldroth led his cavalry bravely and challenged Drong to single combat, wounding him before he in turn was killed by the Dwarf King. [1f]