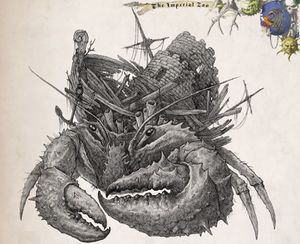 Leviathans are massive sea-creatures, seemingly vast crabs crossed with a lobster and often measuring more than thirty feet across. [1a]

Creatures of the Deep Sea, they are seldom seen at the surface but are highly dangerous when they do rise. [1a]

Some claim that they are the heralds of Manann’s wrath, punishing those who’ve displeased him causing sailors to give offerings to ward off their fury. Cults have even arisen in some ports that are dedicated to specific Leviathans. [1a]

With shells harder than tempered steel; arrows and small-arms fire mean little to them and their huge pincers can cut a fully armoured Bretonnian knight and his barded steed in half with ease. [1a]