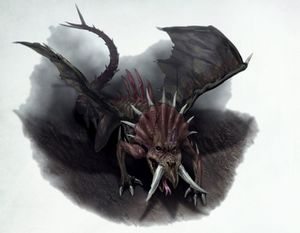 Abyssal Terrors, also known as a Winged Nightmares or a Hellsteed is a term given to a wide variety of terrifyingly powerful monsters, living or undead, that serve as combat mounts for only the most war-like Vampires. Some of these monsters are creatures of Chaos born from the mountains, the resurrected hybrids of rapacious beasts or resurrected monsters that were given life with the use of Necromancy. Others are nightmarish creations that were given bodies of writhing blood and flayed skin thanks to the use of science and Dark Magic. The most common of these variants are generally winged creatures.[2a]

Most Abyssal Terrors are inevitably borne to war on ragged wings, allowing their Undead masters to strike at the heart of the enemy army. The latter-day Von Carsteins, for their part, were known for their use of a huge wolf-headed variant with slavering jaws and leathery wings. The exposed spinal columns and bony tails of this particular mount oozed with a numbing poison that drew all warmth from those it infected.[2a]

Other then being forced into servitude, when a powerful Necromancer or Vampire wishes to create a Abyssal Terror of his own, the creation process has more to do with the unholy combination of mad science and dark sorcery than in any natural process. The most talented of the Vampires that create them, such as the hidden brotherhood of the Necrarchs, draw a twisted amusement from such blasphemous births. They use parts harvested from a wide variety of monsters, fusing bone with ragged muscles and sinew together. Their vile creation is finally given animus when Morrslieb is at its fullest and a portion of that cyclopean moon's power is invested in the beast as it lurches and twitches upright. With its birth, the creature is forever bound to the will of his Undead masters.[2a]

Some Terrors have Sword-Claws which are fused to their bones by Necromancy whilst some have elongated tails with venom-tipped protrusions. [1a]