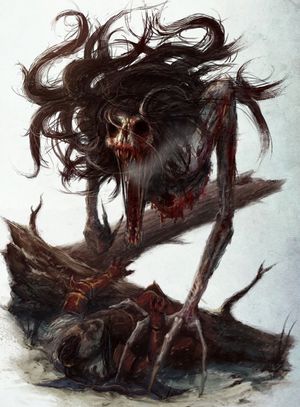 Mourngul are terrifying half living creatures that are found in the wildernesses of the world. [1a]

They haunt expanses of emptiness and are neither alive or dead, feared by all who encounter them, except Ogres who seem not to be preyed upon by them. [1a]

They are known to dwell on the highest peaks of the Black Mountains. [1a]

Legends claim that they are the remanents of those who devoured their companions in order to survive. [1a]