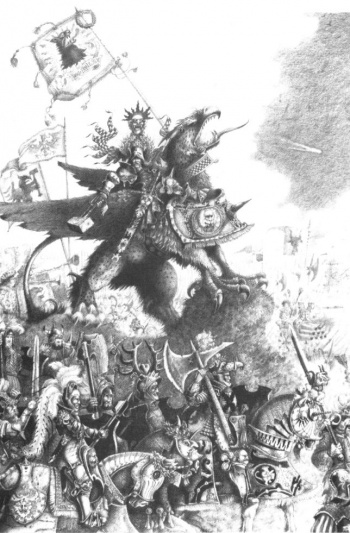 Griffons are strange creatures, resembling Hippogryphs in having eagle heads and wings, but differ in possessing leonine, rather then equine, bodies [3a] with powerful talons. [7a]

They can grow to be two or three times the size of a horse. [3a] Some have spotted or striped skins, others are pitch black and some golden pelts like mountain lions. [7a]

Their name in the Elf language translates as savage perfection. [6a]

In Ulthuan, they are found in the Annulii Mountains and in the rocky areas of Chrace. [3a]

Adventurers brave the dangers of the Worlds Edge Mountains to seek out their nests and steal chicks that can be raised in captivity. [7a]

They are at times ridden into battle by the high-ranking officers of the The Empire, prized for their sharp claws and powerful beaks (the latter consistently rivaling Greatswords' blades in power), excellent reactions and high overall resilience. Most surprising, however, is the way they can easily bypass enemy parries while staying out of reach themselves, something only the most skillful warriors can achieve after decades of training.[1]

In Chrace, High Elf hunters have become especially skilled at rearing and training hatchlings as many Griffons can be found in the high mountains above their lands. [4a] They know that such creatures are seldom given to cruelty, unless those they regard as kin are threatened. [5a]

The most famous Griffon is Deathclaw, the personal mount of Emperor Karl Franz. Although it sometimes flies free above the city - it returns to its cage in the Imperial Zoo at nightfall. [1][7a]