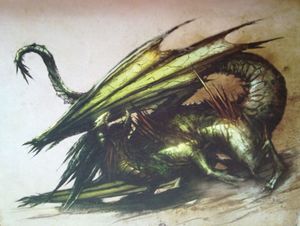 Warpfire Dragons are a rare type of Dragon. [1b]

They have long, charred-black bodies, patterns of baleful fire emerging as they constantly move, twitching and shuddering whilst clusters of strange crystals sprout from their scales. The air around them is contaminated by the Warpfire Aura of malign radiation that can burn the ground and shrivel vegetation. In battle the make use of the energy within them to burn anything that dares close with them. The do not breath fire but rather coruscating red-black lightning that burns anything that it touches, be they living flesh, inanimate material or even ethereal spirits.

It is thought by some scholars that they are originally from the southern Chaos Waste which is known to be the domain of Daemons and is littered with warpstone from the birth of Morrsleib. It may be that those dragons sighted in the world are actually younger dragons who have left the domains of vastly powerful older Warpfire Dragons that rule the continent.[1a]

These dragons devour pure Warpstone, and only their mighty constitution can withstand the chaotic taint and massive energy contained within it. Their nature means that warpstone weapons rarely affect them and magic directed against them often fails or results in a devastating miscast but when they die, they often explode in a huge blast of magical energy. [1b]

One of the main sources of warpstone in the Old World are the Skaven and so Warpfire Dragons often come into conflict with the ratmen, digging into holds and burrows and attacking fortresses that they know will contain the material they seek. Some however seek magical prey in the Chaos Wastes or the undead to sustain themselves. A few Wizards will even bargain with a Warpfire Dragon, offering warpstone for their assistance in battle or other tasks. [1b]