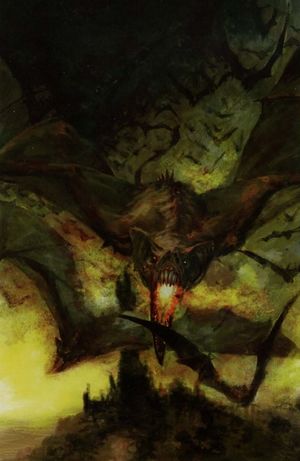 Fell Bats, also known as Vampire Bats or Bloodwings [2a] are huge night predators that require the blood of the living to exist. [1a]

Those who have encountered them, and survived, tell how these beasts hunt with deadly accuracy, swooping down to knock knights from their saddles or pick off unaware lone warriors.[3a]

Some vampires view Fell Bats as a Bretonnian Lord might his prized hunting falcons. They offer precious sweetmeats to their Fell Bats, but to harness an entire flock, a grander sacrifice must be made. A fresh victim, belly-slit and screaming, or a terrified messenger sent to run into the night with his eyes put out is more to their taste. Once they have the scent of gore, they will fall upon the enemy battle line with bloodthirsty intent.[3a]

With a wingspan of up to twelve feet, [1a] and a body as long as a grown man, a Fell Bat is a fearsome sight. In truth, a Fell Bat bears as much resemblance to an ordinary bat as a maddened lion does to a domestic cat. They are darker than midnight and silent as death, even when in full flight. In fact, the only noises that a Fell Bat makes on the hunt are horrible gobbling slurps when it sinks its distended mouth into living flesh. [2a][3a]

Some scholars speculate that their ancestors drank a vampires blood and so joined the ranks of the Undead. [1a]

In the fifth edition they are refered to as Vampire Bats but it also confirms they are known as Fell Bats, with later editions swapping the names around. [1a]