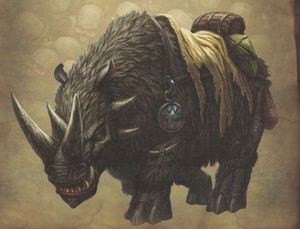 Rhinoxen or Rhinox are large, furry and horned beasts, looking like both oxes and rhinos, hence the name. [1][2]

Ogres also use them as pack, herd and even riding beasts in the Mountains of Mourn. [6a]

Being so large, they are understandably strong and resilient, with the coat of fur thick enough to deflect blows. Like Ogres it is quite slow-witted, but when it sees the nearby enemy, it will almost always charge straight at it, molesting to death anything in its way. Even larger variety exists, known as the Bull Rhinox, which easily matches the Varghulf in power.[1][2]

The Rhinox has very poor eyesight and this coupled with its obstinate nature means a herd will not alter its path for anything - predators, rockfalls or the weather. They do have a keen sense of smell but also tend to charge anything that does not smell like a Rhinox, or even if it does! [5a]

In the Ogre Kingdoms, the Rhinoxen usually serve as a food source for the Ogres but different Ogre tribes interact with Rhinoxen in a variety of ways. Others attack Rhinoxen weakened by victory in a leadership contest, break their creature will and tame them to act as monsterous mounts. Older rituals persit in some tribes who send their youths carrying juvenile Rhinoxen to the top of towering mountains to prove the worth of the youngster who must face the mountain cold and also return without devouring the beast. On their return some feast on the creature, but others have formed a bond with the beast that endures as both.[6a] Some Rhinoxen are used to pull Gnoblar Scraplaunchers, while both regular and Bull Rhinoxen are used as mounts by the Ogres powerful enough to break them.[3][4]

They are hunted by various races - including Ogres, Dwarfs and in particular Night Goblins who, though unable to confront it directly often trap it in a defile and crush it with boulders. After all, a single Rhinox can feed an entire tribe for a long time, especially washed down with a good pint of fengus brew. [5a]