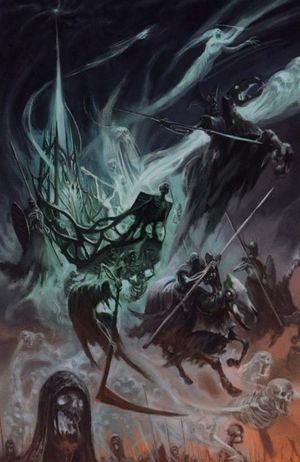 Mortis Engines are powerful totems of magic which contain the remains of Necromancers. [1a]

Liche-lords and Necromancers can become extremely powerful even when destroyed and can be used by vampires as a weapon against the living and /or their enemies.[1a]

The body of the wizard is enshrined in a cage of fused bone and remnants of its formed glory, carried aloft by a horde of spirits bound to protect it for eternity. A Corpsemaster - a servant immune to the malign power of the engine itself controls it in battle whilst the aura of power and hate that clings to the engine attracts Tomb Banshees who swirl about the forbidding device whilst the Corpsemaster guides it. [1a]

As a battle rages, the remains - usually a bone or skull can be removed and used to drain the energy of the enemy and invigorate the undead, but this is not without risk. Energy can build up and damage anything nearby whilst if it is destroyed it will explode in a vast wave of Dark Magic. Some more powerful engines contain ancient necromantic texts that can assist or destroy nearby practitioners of such magic. [1a]