Order of the Blood Dragon 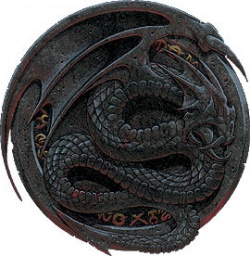 Symbol of the Blood Dragons.

Led by Walach Harkon the Order of the Blood Dragon, is probably the most famous group of Blood Knights in the Old World. Blood Dragons desire skill in military combat, but are often unwilling to become rulers or land owners, thus making them undead Knights Errant. Their goal is to succeed in mastering combat even if it means killing thousands or more in the process. [3a]

To the Blood Dragons, humans and other mortals are either training dummies or worthy opponents and they only show mercy to one who may become worthy in the future. It is not unknown for one of these vampires to kill an entire village as they test the edge of their newest blade. [3a]

Armies of the Blood Dragons

They favour small but flexible forces made up of elite troops which leave plenty of oportunity for indivdual feats of arms. Those who were once knights of Bretonnia often organise their followers and fight themselves in the lance formation. [4a]

Over time, the Blood Dragons became a macabre parody of the virtuous templars that Walach turned. Though they retained the Dragon as their symbol, with blazons and crests in their likeness, their armour was encrusted with images of death and slaughter. Their blades were fell weapons inscribed with dark runes, chased with precious metals and fashioned in the likenesses of evil beasts. The knights did not ride flesh­ and-blood horses, but charge across the field of battle upon evil Nightmares that were clad in thick barding painted with disturbing icons of necromantic power.

The Blood Dragons descended from an order of mortal knights called the Order of the Blood Dragon, whose fortress monastery was the Blood Keep. This now ruined fortress lay in the Grey Mountains, and was southeast of the city of Nuln. The fortress guarded the mountain pass to Bretonnia, and the order's knights were pledged to the protection of the people of the surrounding area.

The fall of the order came when the vampire Walach of the House of Harkon travelled to the keep. Entering the gates, he issued a challenge to the entire order garrisoned there to single combat. The knights were obliged to accept, and in any case certain that an entire order of knights against one man could have only one conclusion. But, one by one, each knight fell to Harkon. He spared those he found worthy opponents, giving them some of his blood and cursing them to the immortality of vampirism with the slain were animated as Wight men-at arms. [1b][3a]

With the defeat of the order, the Blood Dragons were reborn under Walach Harkon, and the living people of the area suffered through the long years of a reign of terror. Only when the witch Hunter Gunther van Hel revealed the truth was the keep put under a lengthy siege of three years by an imperial army of four entire Templar Orders before the keep finally fell. [1b][3a]

At the end of the siege the order was destroyed as an organisation, although a number of the knights, including Harkon survived, his consort Aurora did not. She was beheaded by the Reiksmarshall and his favourite son-in-blood, Mikael was killed by Warrior Priests of Sigmar. Although the order was officially destroyed when the keep finally fell, many of its knights survived. [1a]

The knights scattered across the world to Bretonnia, Estalia, Tilea and beyond where they set up hidden domains of their own or became mercenaries, assassins or soldiers. [1b]

Centuries later Walach gathered a new brotherhood of 16 knights and returned to the keep where once again they sat in the great feasting hall with their unearthly-beautiful brides, the walls guarded by Wights. [1a] He commands again as Grandmaster of the Ordo Draconis. [1b]

During the End Times, the newly resurrected Nagash started recruiting many of the world's most powerful undead lords to form his generals. Harkon joined and became one of the Mortarchs and led the order at Nagash's command. To this end they played a vital role in the defense of the Auric Bastion in the northern Empire. Under the command of Vlad von Carstein Harkon and the order fought at the Battle of Alderfen. Here a Nurgle force breached the bastion and started butchering the Imperial forces beyond it. All looked lost until the surprise undead counter charge, led by Harkon and his knights, halted the Chaos advance long enough for the breach to be sealed. However, in his zeal Harkon and his knights had penetrated far beyond the Bastion itself and then found themselves trapped behind it.

It wasn't until the Battle of Heffengen that they would resurface. After the collapse of the Bastion, Von Carstein sought an alliance with the Empire and to this end planned to fight alongside the Imperial forces at Heffengen to hold back the Chaos hordes led by Crom the Conqueror. Just as he was about to reveal himself and be recognized by the Emperor as a hero and ally Harkon and he knights charged onto the battlefield from the Chaos lines. It was revealed that while trapped behind the Bastion, the Order had fallen to temptation and pledged themselves to Khorne the Blood God of slaughter. This treachery reached it's peak when Harkon, rising a skeletal dragon, engaged in an aerial duel with Karl Franz, defeating him and casting him low.

It can be assumed that the majority of the order was either destroyed at the battle, or remained servants of the Blood God throughout the End Times.

Let your blade be your only truth, let death be your only answer, and let your quest be for nought but to become more than what you are. [3a]