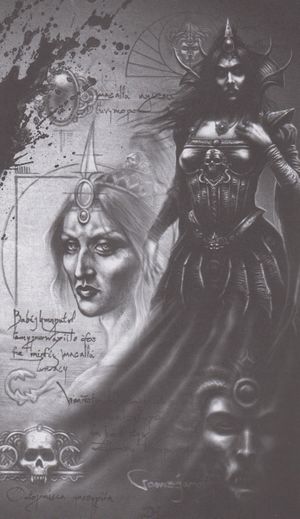 Lady Khemalla of Lahmia is an ancient vampire of the Lahmian Sisterhood.[1]

She acts on behalf of the Sisterhood by elminating other vampires who may be a threat to her queens plans. [2]

She is said to have escaped the fall of Lahmia and if true would make her one of the oldest vampires. [2]

As she grew older, she desired to gaze upon her face once more, commissioning some of the best painters in the world to create a masterpiece and rewarding those who pleased her with a draught of her own blood. This in turn would gift them with an unnaturally long life. These included: Bardova, the Chaos tainted Eastalian Dari, the legendary da Venzio, Giovanni Gottio and Litto. [1]

She created a number of vampires, but was reluctant to do so for true artists, for as she herself noted the transformation tended to remove creativity. [1]

Like many ancient vampires she has been known by many names: Eleanor la Voisine, Lady Lenore, the Vampire Mistress of Mousillon, Katrina the Bloody, the Countess Karmilla and Mirkalla von Leicheberg. [2]