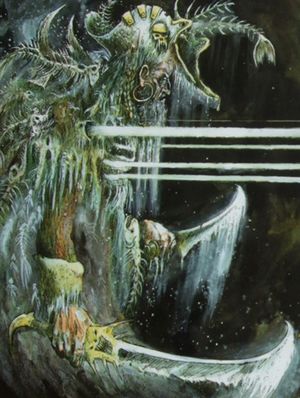 Captain Vangheist is the ghostly commander of the Shadewraith. [1a]

In life, Vangheist was a mercenary and pirate who captained the Stormbreaker. [1a]

He and his crew were hired by the Archmage Albrechtus von Zeich, who made them swear an oath to Manann, to head north. With the firepower of the ship and the mage, the intial onslaughts by pirates and sea-scorpions. As the voyage progressed further into dangerous waters, Vangheist entertained the archmage in a feast after a victory over salt-harpies and dispatched his first mate to search his quarters where he discovered an ancient tome which promised eternal life in the lair of a serpent of fire. [1a]

As they progressed a tendril of fire errupted from the sea becoming a eight headed flame-wyrm that killed many of the crew before being defeated. The Archmage was elated, despite his wounds and his task achieved he orders the ship to return to safer waters. At this, Vanghiest refused and instead shot the wizard, throwing the body overboard and ordered the ship to set sail agin for the north. [1a]

They headed into the far north, eventually passing into the Realm of Chaos itself. [1a]

Later the captain, crew and ship itself were spat out of the Realm as unquiet spirits [1a]