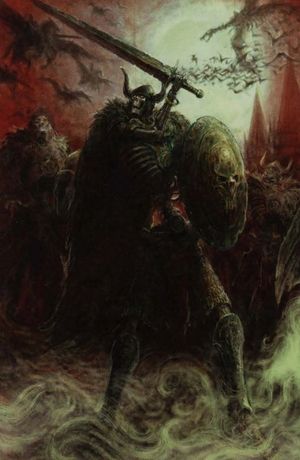 Grave Guard are Wights, powerful and ancient undead warriors now held together by evil magic. [1a]

Summoned from their rest by the dark sorcery of vampires or necromancers, they are powerful warriors and upon the walls of Drakenhof Castle, and other Vampire­ haunted keeps of Sylvania, tireless warriors patrol clad in rust-gnawed armour. These dread sentries are drawn from their ancient tombs to act as guardians for the Vampire rulers of Sylvania. Although their bodies have decayed, leaving only bones and tattered flesh, Grave Guards are held together by evil magic so strong that it has endured for centuries. They wear ancient battle gear of primitive alloy, corroded by time and dusty with the years. These eerie, silent sentinels stand constant vigil on the crumbling battlements and at the iron-bound gates, never resting, eternally ready to defend their Vampire masters. When a Vampire marches forth, his Grave Guard advance at the head of the Undead host. They form a formidable corps of warriors, their enchanted blades cutting down the toughest of enemies with strike after pitiless strike. [2a]

The sheer resilience of the Grave Guard has become well known across the nations of Human, Elf and Dwarf. Their combination of stout shields, thick armour plates, and the natural resilience of the Undead means that a simple sword blow has little chance of stopping them. [3a]

At the Battle of the River Reik, Krell and his Grave Guard, the Doomed Legion were some of the few undead to continue fighting after Sigmar struck down Nagash. They fought their way clear and went on a rampage through the surrounding countryside. [3c]

When Lichemaster Kemmler broke the wards of Athel Loren and raised a legion of Grave Guard from the barrows hidden in its outskirts, the Wood Elves of that verdant realm found their usual tactic of pin-cushioning the intruders with arrows to be ineffective. These Undead warriors merely trudged on tirelessly into the forest, many with the slender shafts sticking out from eye sockets and empty rib cages. They were only defeated when the ancient tree-spirits of that realm arose and crushed the Grave Guard one by one under giant root-encrusted feet. Unfortunately for the defenders of Athel Loren, the Grave Guard attack was merely a diversion as Kemmler had escaped with the magical artefacts he had come for, hours before his plan was uncovered. Worse still, that same night, he raised up every last one of the Grave Guard to fight once more, and the forest was stained with Elven blood.[3a]

Grave Guard wield bronze and black iron Hand Weapons, Spears, Halbards or Great Weapons inlaid with gold and silver, runes glowing with power.[1a][1b] They wear Light [1b] or Heavy Armour [2b] [3b] and carry Shields. Some standard bearers of a regiment will carry magical banners. [2b] Barrow Guardians still retain their bronze or even flint weapons but in their hands are deadly and embued with magic. [5a]