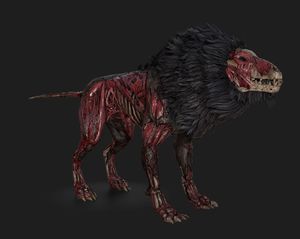 Dire Wolves are decaying parodies of living Giant Wolves which roam both the Badlands and the forests of the Old World. Their flesh hangs in tatters from cracking bones, their skulls and innards exposed through tears in their skin. They are swathed in an eerie, glimmering twilight and their eyes glow with unnatural energy. The stench of putrefaction hangs on their wet breath and their howls cause shivers of fear to freeze the bold. When they are slain, their bodies dissolve into a coiling miasma, leaving nothing behind.[3a]

The lands of the eastern Empire are plagued by giant wolves that emerge in winter from lairs high in the Worlds Edge Mountains. Driven by a ravenous hunger, they descend to the foothills in large packs, attacking farms and villages and preying on travellers. The men of the Empire hunt these beasts mercilessly, but this only serves to keep their numbers in check, and their voracious attacks at bay, for a short time. [1a][3a]

In the blighted lands of Sylvania, the corpses of these wolves must be burnt or buried deeply, for those that are not will return from the dead and continue the hunt. Even when the correct precautions are taken, and the bodies of these monstrous predators are buried in deep pits, Dark Magic can still gather and resurrect them. Half-rotted, their fur matted with blood and grime, the animated carcasses claw out of the earth in order to hunt living prey again. As they move, maggots writhe in open wounds and burnt skin hangs from their yellowed bones in ragged flaps. [1a][3a]

Dire Wolves act as the hunting hounds of the Vampire nobility, retaining keen senses. They gather in great packs around the castles and towers of the Undead lords of Sylvania, mournful howls echoing for miles across the still night. When the princes of Undeath make war upon the living, the Dire Wolves follow, treating the Vampire as their pack leader. In battle, the Dire Wolves often lope along the flanks of the Undead army, driving away enemy cavalry and leaping on small, vulnerable regiments or war machine crews.[1a][3a]

Vampires sometimes keep the largest of these creatures in pens deep below their castles and towers, feeding them on local peasants until they are large and glutted, then goading them to new heights of viciousness. The Vampires imbue their creations with Dark Magic to increase vitality and bestow a callous cunning. These monstrous creations are known as Doom Wolves, and it is these larger, more ferocious beasts that lead the Dire Wolf packs to war.[3a]

Doom Wolves are also sometimes chosen as companions to vampire lords at home and on the hunt. They are also able to enhance the hunting ability of their packs. [4a]

Dire Wolves are often led by Doom Wolves and attack with their Slavering Jaws. [1b]