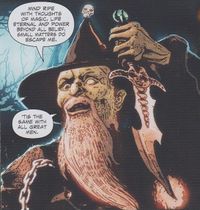 Rudolph Brecht was a necromancer in the Empire who sought the secrets of using warpstone to prelong life. [1]

He often refered to himself in the third person. [1]

Seeking to prevent the aeging process he began to research necromancy and eventually pledged himself to a Vampire Lord of Sylvania. Although he gained much knowledge, including from the Liber Mortis itself, he sought to escape his obligations and restrictions. He began to look for other ways of gaining power and discoverd that although most skaven had short brutal lives, some of their leaders were able to extend them through the use of warpstone based technology and magic. [1c]

He managed to enter the Under Empire and steal a warpstone crown that skaven of Clan Skyre used to bolster their own life span - although experiments with a human captive showed it was too dangerous to used in the same way. Instead he used skaven captives to use its power then he would in turn drain thier lives with a soul-stealing dagger. [1c]

Fleeing the wrath of the skaven and his lord, he made a monthly sacrifice of four humans in a ritual to conceal himself from them, however at the last, wolves dug up one of the corpses, breaking the ritual and alerting his pursuers to his presence in Wissenland. [1a]

He prepared to flee again, but was captured by a band of Greatswords led by Sergeant Frolich whose regiment had already been attacked by skaven seeking the crown he had stolen. Desperate he warned his captors to let him go but before they can do so, his lord arrives. [1b] Rudolph reveales his work to the vampire lord, hoping he would spare his life - he didn't.[1c]