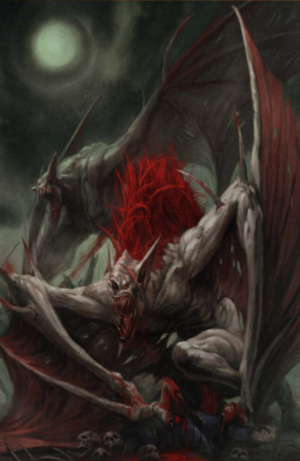 A Vargheist is the darkness within a Vampire's soul made manifest - towering winged humanoid monstrosities. [1a]

These horrific creatures were once powerful Vampires who have succumbed to the more bestial side of their nature due to an overexposure to Dark Magic. Though the Vargheists once walked and talked as noble lords, these curse-born Vampires have devolved into ravening predators desperate for the taste of blood. They prowl the battlefield in packs, ready to pounce upon the least sign of weakness and tear a hole in the enemy ranks with crimson claw and bloody fang.[1a]

The creation of a Vargheist is a strange metamorphosis that takes place far from the eyes of mortal. Under the extensive castles of the Von Carsteins are vast subterranean networks of basements, galleries and dining halls with vaulted ceilings that stretch into the pitch darkness above. This ghastly domain is where the birth of a Vargheist takes place. Within the deepest, darkest part of the castle, chain-bound coffins and sculpted sarcophagi nestle upside-down like cocoons. If a chance visitor were to approach these coffins and blow away the carpet of dust upon them, one would find the names of many former Von Carsteins.[1]

Not all of these coffins are empty, for this hidden realm is where the Von Carsteins lock away those of their family who have fallen out of favor. Those who come off worse in the endless power struggles of the Vampires often find themselves prematurely buried and left at the mercy of their own relentless thirsts, for there can be no greater suffering for a Vampire than to not die for aeons from the great thirst that wracks their body. Slowly, over the course of decades, the constantly dripping water, magically tainted by warpstone in the stalactites and the tainted soil of Sylvania overhead, finds its way into the prisons of these unfortunates. Torpid for want of fresh blood, the slumbering Vampire would unknowingly drink from the tainted water and begin to devolve and change shape, growing larger and more bestial as the diluted Dark Magic begins to transform their body.[1a]

Whilst the transformation from humanoid into monster takes hold, the muscular Vargheist will crack open its stone prison with a great effort. Casting aside its chains, the creature unfolds its leathery wings and rears up into the darkness, letting loose a terrible scream of rage and betrayal that sends great swarms of bats whirling throughout the cavernous chambers. The shattered remnants of its sarcophagus fall away, and the name and personality of its former incumbent is left behind in the mire. The newborn Vargheist first instinct is to hunt, desperate to rejuvenate drink fresh blood after so many years. At the first taste of blood, the transformation is made permanent and what was once a proud lord of the dead is forever cursed to an existence as a ravening beast.[1a]

Though each Vargheist emerges from its prison far stronger in body, it is invariably weaker in mind. After centuries of thirsty confinement, all they really want to do is feed. These creatures are easily bound to a Vampire's will as a result, and are sent into battle in packs in order to feast on those enemy armies foolish enough to stray too far from the sanctuary of the main battle line. In battle, Vargheists make formidable fighters, for their raw fury and terrible hunger is undiminished by the control exerted by their cruel, vampiric masters.[1a]

Units of Vagheists are sometimes led by a Vargoyle. [1b]