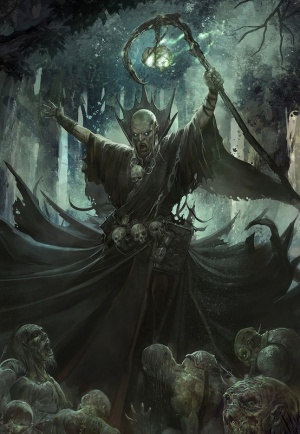 Baron Frederick van Hal was the ruler of Sylvania during the Skaven Wars.

Van Hal had been a grieving Priest of Morr when he discovered necromancy. He became ruler of Sylvania in 1106 IC [1a] and from early on pursued a vigorous policy against the corruption which plagued The Empire during the rule of the incompetent Emperor Boris Goldgather. Everything changed in 1111 as the Great Plague began to ravage The Empire.

While all provinces of The Empire suffered, none suffered more than Sylvania. A staggering nine out of ten of its inhabitants perished with the plague [1a][2a] and as terrible as it was, worse was yet to come as a series of warpstone meteors fell upon Sylvania. Hordes of undead began to rise from their graves and attacked the living.

No outside help was likely to come; the Skaven Wars had begun and Skaven armies were systematically overrunning and occupying The Empire.

The baron was desperate; he lacked the military strength to deal with the undead, never-mind the inevitable Skaven invasion. Then a pale mysterious nobleman arrived with an offer which Frederick was unable to refuse. Presenting himself as Prince Vladimir he offered the Nine Books of Nagash and helped the baron in gaining control over the undead hordes [1a], who bound to the baron's will built Vanhaldenschlosse.

With Vladimir's help, Frederick van Hal became a skilled necromancer and wrote the Liber Mortis, today considered the finest source of knowledge on necromancy available to the scholars of the Old World [3a]. He also made several pilgrimages to the Land of the Dead.

Searching for warpstone the long-expected Skaven armies crossed the borders of Sylvania, but the undead, controlled by Van Hal, managed to stop them [4]. The ensuing conflict weakened both sides[1a][3b][5][6a][7b], much to the advantage of Mandred Skavenslayer.

Frederick van Hal was later murdered under unknown circumstances by his ambitious apprentice Lothar von Diehl, who in turn was expelled from Vanhaldenschlosse by a group of knights apparently led by the baron's ghost.[1a][3b][6a].

Lothar's ultimate fate is unknown, and whether Prince Vladimir was involved in any of these later events is another mystery.

To date, there have never been any rules or models for Frederick Van Hal.