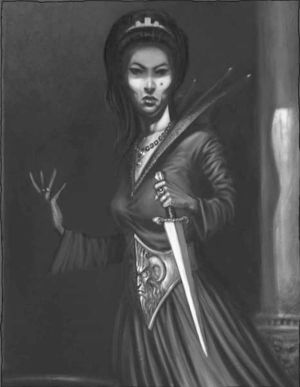 Baroness Lydia von Carstein is a Vampire of the Von Carstein Dynasty, she often uses her husbands name Plicticos. [1a]

Lydia is the third daughter of a Kislevite noble but was schooled abroad at the Morrian Abbey of Blessed Aethelbert. At the Abbey, Lydia proved to be a brilliant student, the grand abbot employed her linguistic talents to decipher previously impenetrable theological texts. However as she worked, Lydia stumbled upon forbidden scrolls and tablets concerning ancient prophecies and the Land of the Dead, which lead to the grand abbot hastily discharged her from the abbey. [1a]

Rather than returning home Lydia journed into the forbidding land of Sylvania, where her translations indicated there was a powerful source of Dhar in the foothills east of Hunger Wood. She arrived at the door of Voislav Plicticos, a Vampire of the Von Carstein bloodline and who was immediately smitten with Lydia. Subsequently on their wedding night, Voislav bestowed the Blood Kiss upon his bride. [1a]

At first, Lydia was content, absorbing the arcane knowledge she had accumulated on her long journey although many of the tomes and scrolls were written in high Nehekharan, a language from which the modern Strigany tongue had evolved. Seeking understanding, Lydia befriended Mama Raluca and spent many nights among the Rumanyik discovering their language and lore. [1a]

The Baroness has used her dead husband’s fortune to refurbish the castle as its windows were draped with colourful banners, its masonry scrubbed clean and rooms filled with exotic furniture from across the Old World. She also revitalised her village of Helfurt, although beyond the Castle the main focus was the ancient baths housed below the ruined fortress above the village. Lydia hopes to enhance her magical powers by bathing in the blood and tallow of her subjects, many of whom vie for the privilege of serving their mistress in this manner. [1a]

She a powerful and learned necromancer and suffers no ill-effects in sunlight. [1a]

Lydia has a deep fear of sawdust, embalming fluids and warpstone as well as being repelled by daemonsroot, garlic and witchbane. [1a]