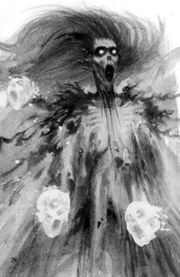 Banshees are the restless spirits of evil women. [1a][2a]

They are also known as Tomb Banshees, Grave Harridans in the southern Empire, the Wailing Hags in Bretonnia and the Freezing Shriek by Dwarfs.[2a]

A Banshee has a skull-like visage surrounded by writhing hair. She is dressed in flimsy shrouds and grave-clothes and is usually surrounded by the spirits of the men that she murdered whilst alive.[1a][2a]

Banshees were usually magic users of some kind whilst alive, either sorceresses, enchantresses or witches. They fear to pass into the afterlife and face the punishment that awaits them. Instead they linger in the mortal realm, constantly howling as they remember the pleasures of life that they no longer have and in longing for the peace of the grave that they cannot achieve. The wail of a Banshee stikes terror into the hearts of those who hear it. Only those with hearts of iron can hear it and not die of fright.[1a]

With the correct rituals, a Vampire can summon Banshees to the battlefield and bind them to his or her will. Although they have no physical form they can drain the life of a mortal with but a touch, although many soldiers will have been driven mad with fear long before that happens.[1]

Banshees are also claimed to be sent by the elf goddess, their wailing fortelling death - it is further said that should an Elf withstand such a scream they will become immortal. [3a]

Until the 7th edition of Warhammer Fantasy Battles they were simply known as Banshees, but in that editions army book, they became the champions of Cairn Wraith units and were renamed Tomb Banshees. [2a]