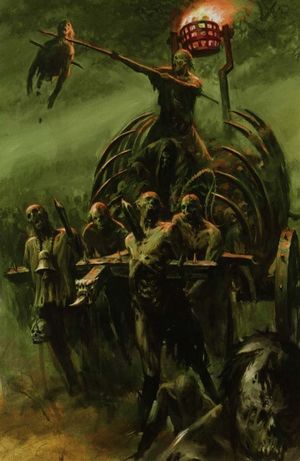 A Corpse Cart is an abomination created by powerful necromancy and famously used by Vlad von Carstein himself in his war against the Empire. [1a][2a]

In 1111 IC (Imperial Calendar) a hail of warpstone meteors left thousands of chunks of that malign material all over the land of Sylvania, plague wagons transporting the dead were fused with the piles of dead they carried, the hapless drivers transforming into strange withered undead. Frederick van Hal was forming a great army and these strange melded creations were bound to his will. [1a][2a]

Although they were an important part of that shambling horde, acting as foci for his necromantic magic, control of them was broken when Van Hal was murdered by his apprentice. They dispersed and brought misery to those they encountered for the next thousand years. Powerful necromancers and vampires still sometimes call these monstrous creations and bind them to their will. [1a][2a]

Some are still sighted near the damned city of Mousillon where stories are told of brightly coloured skinned wagons that lure mortals to board them and be drained of life. Such constructs are called Charnevals. [1a][2a]

As its name implies, this is an old, rotting cart stacked full of body parts, animated by necromancy. It allows the Vampire Counts to make use of corpses too damaged to make good Zombies. Also, this cart provides great protection to the rotting flesh inside, although the construction itself is not particularly durable. However, this is compensated with the cart literally regenerating itself from the successful blows.[1a][2a]

Those who dare to attack this corpse-bearer will find themselves assaulted by the multitudes of grasping hands protruding from the cart. The separate limbs lack the strength of living, but the sheer number of them is usually enough to win. Some unfortunate enemies might find themselves attacked by a Necromancer riding the strange construct, for many of their kind like to personally control the corpse-carrier.[1a][2a]

The cart's presence has some unusual effects on nearby Undead. They seem to be somehow invigorated by its sight, making the usually slow-witted Skeletons attack faster than Dark Elves, usually renowned for their fast reactions. Even more distressing, many carts seem to bear Unholy Lodestones on them, these minerals amplifying the foul process of raising Undead. It is not unusual to see them equipped with the Balefire instead, which weakens the pure Winds of Magic used by the enemies of the Vampire Counts.[1a][2a]