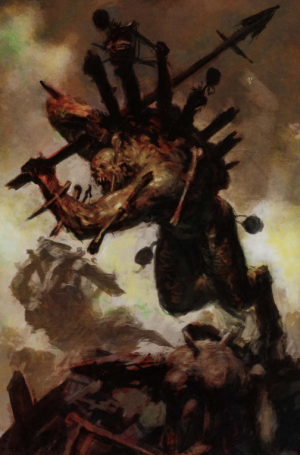 Crypt Horrors are malformed monstrosities created by Vampires, most notably the Strigoi Ghoul Kings of the Warhammer World. [1a]

Crypt Horrors are a variation of the common Ghouls who have consumed the blood of a Vampire, giving the creature supernatural size and strength, and used by many Undead factions as a form of heavy shock infantry. The malformed monstrosities known as Crypt Horrors are, thankfully, a rare sight. Spoken of in hushed whispers by night watchmen, old priests of Morr, grave-keepers and other nocturnal citizens of the Empire, the few persistent reports of these looming and moon-mad fiends are dismissed as the ravings of superstitious fools. At best, they are thought to be exaggerated sightings of unnaturally large Crypt Ghouls. Unfortunately for the lands of the Old World, however, the stories are often accurate, for Crypt Horrors are very real.[1a]

In order to create a Crypt Horror, a Vampire must open his veins to a Ghoul and allow it to gulp down his precious blood, which is essentially a pale bastardisation of the Blood Kiss and an act that is reviled by those who count themselves amongst the elite of Sylvanian society. As such, these acts are often perpetrated by only the most desperate of Vampires, most specifically the Vampires of the Strigoi bloodline. For a Strigoi to allow a Crypt Ghoul's foetid mouth to sink into its flesh is a sign that the Vampire is truly desperate. Nonetheless, some Ghoul Kings encourage this strange and abhorrent practice.[1a]

Once a Crypt Ghoul has drunk the blood of a Vampire, its eyes turn red and it goes into a killing frenzy. During this stage in its transformation, the Crypt Horror would pull down weaker members of its own pack, dragging its screeching prey into an open grave or a shattered tomb in order to consume its gruesome feast undisturbed. After finishing its cannibalistic orgy, the swollen Ghoul will crawl back to its awaiting master, hoping for another draught of its vampiric blood. This transformation continues until by the coming of the next full moon, the new Crypt Horror will have grown to several times its original size and ferocity, thanks to the unnatural blood of the Vampire and the consumption of extraordinary amounts of flesh.[1a]

Crypt Horrors provide a tangible benefit to their Strigoi masters. True Undead can be warded away from gravehaunts by sacred sigils and priests of Morr. Typical Crypt Ghouls are too cowardly to mount a full-scale assault on such a place. Hence, Strigoi Ghoul Kings will create Crypt Horrors whenever they need to smash through such formidable defences. Crypt Horrors are neither living nor truly dead, and as the call of Morr's realm pulls at what remains of their souls, they vent their rage upon the crypt-gardens of the God of Death. Because of this, the human gravekeepers of sepulchres and mausoleums fear Crypt Horrors above all other minions of the Ghoul Kings. Once the magical wards guarding the cemeteries are destroyed by the rampage of these foul beasts, their vampiric master is free to raid the corpse-fields beyond. Though the lineage of Strigos has broken every taboo by creating them, they are able to gain power in this way.[1a]

A Crypt Horror typically towers over its smaller Ghoul brethren, and though it retains the characteristic stoop and loping gait of its former life, its sinews become hard as iron. Bony growths and protrusions push out from the creature's spine, and talons lengthen from splayed, dextrous hands. The potent diet of tough Ghoul flesh washed down with vampiric blood wreaks changes inside as well as out. Though the Crypt Horror's freakish metabolism will soon drive the creature's body to consume itself, in the meantime, the fiend's constitution is such that it can reknit even the most horrific wound with an effort of will. This is the main reason why the more elitist Vampire cliques tolerate these foul monsters. Dark Magic, the sustaining power of necromancy, literally runs in a Crypt Ghoul's veins, and therefore the sheer violence it can unleash. [1a]

They are often led by a Crypt Haunter and carry huge Hand Weapons. [1b]

In the Mordheim: City of the Damned (video game) they are available to Undead Warbands as an Impressive once they have reached a certain level. [2]