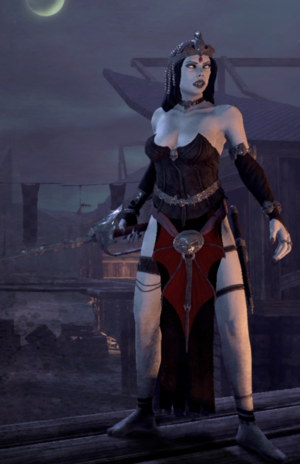 Screenshot of Katherina from the Mordheim: City of the Damned video game

Baroness Katherina von Dernsbach is a vampire who served first Neferata and then Vlad von Carstein. As a favoured servant of Vlad, she bore a signature ring as a token of his authority and a reminder that she was his eyes and ears in the city.[1]

She served first Queen Neferata but then became an agent of Vlad von Carstein who dispatched her the city of Mordheim following its devastation by the twin tailed comet that struck in IC 1999.[1]

There she orchestrated the search for warpstone in the ruins by the servants of Vlad, foiling the schemes of other factions as much as she could. She discovered several new varieties of warpstone that had intriguing properties for magic and necromancy in particular.[1]

In the video game she provides an introduction to the city and dispatches the player on a series of unique campaign missions to recover warpstone. She accompanies the player's warband on these adventures and is a powerful controllable asset for their duration.[1]