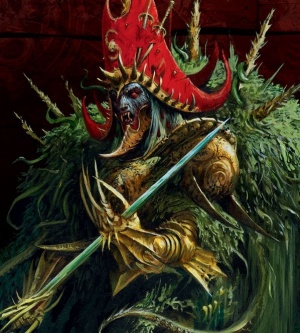 Nyklaus von Carstein or Count Noctilus is the vampire commander of the Blood Reaver and the Dreadfleet. [1a]

A member of the powerful Von Carstein Dynasty, Nyklaus became tired of the constant infighting and decided to seek a different way to power. He had discovered a tempest of magic at the heart of the Great Ocean and spent years studying its mysterious alongside mastering the art of translocation, an aspect of shadow magic.

One dark Geheimnisnacht in 2522 IC[2a] he began a great ritual in the heart of his fortress, raising twelve hundred mortals he had personally slain to shamble in a convoluted spiral to match the flow of the vortex. Fell Bats were summoned and swept across the sky in precise patterns until with single deafening crash of thunder and lightning his castle was shifted to the centre of the Galleon's Graveyard. [1a]