From Warhammer - The Old World - Lexicanum
(Redirected from Zacharias)
Jump to: navigation, search 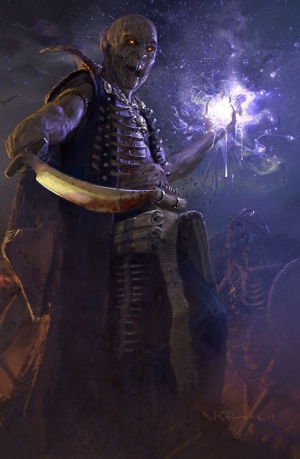 Originally an aging priest in the holy city of Mahrak, he fled its ruins following the brutal siege of the city by Nagash and threw himself on the generosity of the court of Lamashizzar, king of Lahmia. He would later join the cabal of Lamashizzar as they sought to use the books of Nagash (as well as the knowledge of the captured Arkhan the Black) to discover Nagash's secret to immortality. [4a]

Though initially loyal to the king, W'soran later supported, albeit reluctantly, Queen Neferata instead when she demonstrated a greater understanding of Nagash's works. When Neferata became the first vampire, W'soran was one of those she chose to share the secret of immortality with.

He created the Lahmian Cult, a version of the Cult of Asaph that cloaked the need for blood and provided a safe haven for the rulers of the city. The books of Nagash were kept in a arcane laboratory that only he and the queen could open. [4b] In -1350 IC he asked Neferata to allow a new field of research: the raising and communication with the spirits of the dead, to which she agreed. [4c]

Frustrated with Neferata forbidding him to use true Necromancy, he spent the next twenty-five years trying to summon the spirit of Nagash, hoping to gain the knowledge his queen forbade him to seek. Yet he was unable to contact the spirit, not realising that Nagash still lived, after a fashion. Equally dissatisfied with Neferata's restrictions and her growing obsession with Prince Alcadizzar, Lord Ushoran offered to help him. [4d]

In -1222 IC he tried once more to contact and control the spirit of Nagash, who he still believed was dead as a unique conjunction appeared in ths sky - Sakhmet usurped Neru in the year of Djaf. He moved beyond his body and eventually found himself at Nagashizzar where his soul was seen and grabbed by Nagash before he was thrust back into his body. Yet Neferata and the other vampires had felt the power of his ritual and who he had contacted, she confronted him with Lord Ankhat, slaughtering his thralls. When he taunted her that the Great Necromancer was coming and she would grovel at his feet, she staked him, ordering Ankhat to stuff him in a barrel and bury him beneath the temple where no-one would find him. [5a]

When the armies of the other cities of Nehekhara gathered under Alcadizzar and besieged Lahmia in -1200 IC, Ushoran proposed that they dig up W'soran to use his necromancy. Reluctantly Neferata and Ankhat agreed and after twenty-two years trapped in the barrel, W'soran was de-staked, his dark pitiless eyes opening and giving even Ushoran chills. [5b]

W'soran only agreed to assist the defence if he was given possession of the tomes written by Nagash, when Neferata agreed he animated thousands of the dead and unleashed them on the enemy as Ankhat and his queen led the living. [5c] He was nearly destroyed by an artillery strike and as the city fell, he fled north, heading towards the lair of Nagash - Nagashizzar. [5d]

Three weeks later he first saw the fortress and approached, managing to avoid the creatures in the Sour Sea and driving off packs of Ghouls with his magic. He was met at the gate by a dozen Wights, led by the recently resurrected Arkhan the Black - although he did not then recognise him. He was shown to the throne room and fell to his knees proclaiming his loyalty but also that the throne of Khemri had been claimed. [5d]

He spent the next few decades increasing his necromantic knowledge but found his skill was far less than his rival Arkhan and also created a dozen barbarian thralls. In -1163 IC Nagash eteched a sigil of binding into his face and ordered him to serve Arkhan as a lieutenant as he led a vast army of undead warriors into Nehekhara. [5e]

The fleet of bone docked in the ruins of Lahmia and there W'soran waited for several days, gathering his forces and thralls and awaiting a strategy discussion with Arkhan. However to W'soran's anger, the other vampire lord had taken his portion of the army and headed west - it would take three weeks for him to catch up and join Arkhan who had encountered a army of Nehekhara. [5e]

Arkhan was in turn angered that Nehekhara seemed to be prepared for the invasion, noting that to meet them the large army would have had to have been musted weeks before. When W'soran claimed he was a coward, Arkhan suggested that he deal with the enemy which W'soran accepted, advancing his army forwards. The resulting battle, although a victory, cost the undead dearly - magical weapons and arrows ensuring they would no longer rise again. Worse, the enemy army, badly mauled still withdrew in good order behind conjured dust storms. [5e]

When Nagash instead used a plague to cripple Nehekhara, the two led another force which destroyed the last armies of that land, taking Alcadizaar prisoner. This proved to be a mistake when Alcadizaar broke free and slew Nagash. [6a]

He left Nagashizzar in -1150 IC with several acolytes and one of the spell books of the Great Necromancer. Several of his apprentces are given the Blood Kiss in -1122 IC so they can aid him in his studies for eternity. [6a]

After this he spent some time in Mourkain, capital of the Stygos Empire under its vampiric king Ushoran.

Eventually however Melkhior's lust for knowledge grew. After centuries of mistreatment at the hands of his master, Melkhior slew his master while he was in a trance and consumed him over several days in -223 IC. [6a] Taking his master's prized Book of Nagash, Melkhior fled north and established a fortess for himself in the Forest of Shadows where he carried our horrific experiments on the living, occasionally venturing forth with small armies to claim new subjects. [2a] It was later revealed that W'soran was never destroyed by Melkhior and instead possessed his apprentice's body before destroying his own. 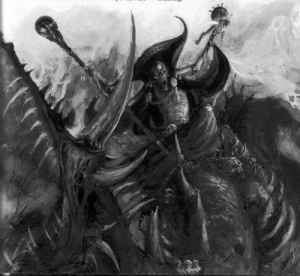 The ancient Vampire was murdered again at the hands of his new apprentice Zacharias.

One day when secretly reading his master's forbidden tomes Zacharias was discovered by Melkhior and barely escaped with his life. Fleeing to a cave to recuperate he came across a sleeping black dragon. Nourishing himself on it's blood gave him incredible power and after taking the corpse of the beast as a mount he returned to his master's stronghold and killed him, [2a][3a] only to be possessed and destroyed by W'sorans spirit. When Zacharias did this to his master, it was not the ironic twist of fate it appeared, but rather history repeating itself, with W'soran once again killing his apprentice and gaining a new body.

Now he rules the Forest of Shadows from a rebuilt tower. [2a][3a]

He wrote this infamous tome, both a book of spells and a collection of doom laden prophesies of the end of the world where Vampires rule over the living, hunting them for sport under a sunless sky. Those who read it risk falling into depression and insanity. [1a]

When he first led an army of Nagash against Nehekhara he rode upon an eight legged palanquin of bone. [5f]