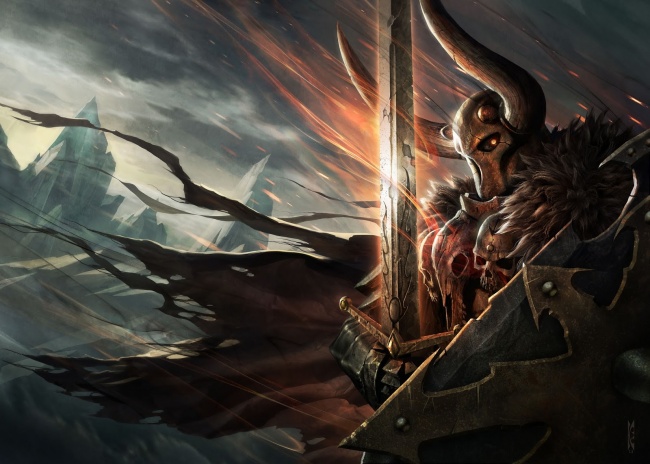 Archaon, Everchosen of Chaos, encased in the Armour of Morkar, crowned with the Crown of Domination, and wielding the Slayer of Kings.

Necrodomo the Insane prophesied of the End Times, speaking of a champion of Chaos who would bear the blessings of all four Chaos Gods. This champion would be known as the Everchosen, and would prove himself by gathering the Six Treasures of Chaos. When Archaon read Necrodomo's prophecies he fell completely to Chaos, denounced Sigmar and the other gods of the Old World and vowed to become this champion, for he had nothing left to live for.[1a]

A unique Mark of Chaos, and the blessing of all four powers in unison. It combines all of the advantages of the individual Marks of Chaos, but is even more powerful.[1d][1e]

The first part of Archaon's dark quest was to go to the Altar of True Darkness in Naggaroth. He gathered a small band of Chaos Warriors called the Swords of Chaos and battled his way to a citadel so tall it appeared to pierce Morrslieb itself.[1a]

Inside the citadel it was so dark that when one of Archaon's followers attempted to light a torch it was snuffed out instead by the darkness. Archaon was unafraid, and marched off alone into the dark. Such was his skill that he was able to slay hundreds of the misshapen monsters that infested the citadel.[1a]

Archaon reconsecrated the altar for the Gods of Chaos, offering up the hearts of the creatures that had crawled in and defiled it. When he emerged he bore the eternally burning Mark of Chaos on his forehead.[1a] 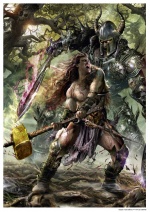 Morkar, in his armour, during his battle with Sigmar Heldenhammer.

The Armour of Morkar belonged to Morkar, the first Everchosen. It makes the wearer invulnerable to all but the most powerful of attacks.[1d]

After leaving Naggaroth on a stolen ship made of black metal and pulled by a sea-drake, Archaon took leadership of a seafaring war band. They sailed to a mysterious land populated with savage half-humans. Neither sun nor moon had ever touched their pallid skin. After six days and six nights of battle, the city of these creatures had been reduced to rubble.[1a]

Archaon delved deep into their necropolis until he found the Tomb of Morkar. Within lay the Armour of Morkar. However, as Archaon reached out to take it, the spirit of Morkar animated the armour and attacked him. It lay down a relentless flurry of blows until Archaon cursed it in the language of the Unberogen tribe. The attack ceased for a moment, and Archaon smashed it aside, banishing the spirit of Morkar and allowing him to claim the armour as his own.[1a][1b]

The Eye of Sheerian is named after the Tzeentchian Sorcerer who discovered it. Although on its own it grants the bearer prophetic powers, when placed in the Crown of Domination its prophetic powers can be used to their true ability to allow the bearer to predict and avoid the attacks of the enemy.[1d]

After claiming the Armour of Morkar, Archaon set out to retrieve the Eye of Sheerian. At that time it lay in the lair of the Chaos Dragon Flamefang, and the ancient drake valued the Eye above all of it's other treasures. Archaon placed his claim for the Eye by smashing his axe into Flamefang's head.[1b]

Long did man and monster battle at the base of the Cliff of Beasts. Flamefang breathed fire and even swallowed Archaon, but the Armour of Morkar protected him. Archaon hacked his way out of the Dragon's gullet with the ferocity of a Flesh Hound, until Flamefang's throat was hacked to shreds and it died of exhaustion and blood loss. Archaon plucked the Eye of Sheerian from its place on the belly of the Dragon and hung it around his neck.[1b]

Steed of the Apocalypse 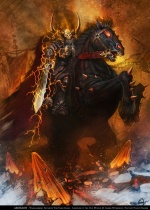 Alternatively known as Dorghar, Ghurshy'ish'phak, Yrontalie and the Steed of the Apocalypse, this daemonic beast was stolen from the menagerie of the Daemon Prince Agrammon in the Realm of Chaos.[1b]Fn|1d}}

Archaon battled his way past the Daemons guarding Agrammon's palace and sneaked inside, hiding beneath a beast that was part man, part mammoth and part insect. Inside was every beast imaginable, and some that are not.[1b]

Archaon tracked Dorghar through the menagerie by its sulphurous stench. When he found it he vaulted on to its back. The Steed of the Apocalypse changed shape and burst into flames, but Archaon was able to break it like a wayward stallion and escape from the Realm of Chaos[1b]

The Slayer of Kings was the sacred blade of Vangel, the second Everchosen.[1b] He bound the Greater Daemon U'zuhl into the blade, and the millennia of imprisonment have sent it insane with rage and fury.[1d]

It was said to rest at the top of the Chimera Plateau, near the top of the world, so this is where Archaon went after stealing Dorghar from Agrammon.[1b] The warriors battling around the plateau saw the determination and destiny of Archaon, and he quickly gathered a huge horde of followers. They swiftly defeated the Chimeras guarding the higher passes and Archaon and his three companions climbed to the top of the plateau.[1 p36]

From the top, Archaon looked down on the world, swearing that he would one day rule over it all. Suddenly, what he had taken for a mountain behind him turned over in its sleep, causing a series of earthquakes in the lands below. Archaon realised that the mountain was actually the father of the Dragon Ogre race, Krakanrok the Black. Even he could not defeat this foe, so instead he and his companions sneaked past the titanic monster, only to find that the Slayer of Kings was clasped to its chest.[1 p36]

Prince Ograx the Great, the strongest of Archaon's companions, was able to lift up one of Krakanrok's talons high enough for Archaon to retrieve the Daemonsword. However, the Daemon bound inside began to shriek with deafening volume. As Krakanrok began to stir, Archaon thought fast and plunged the Slayer of Kings into Prince Ograx's chest. With the blade's thirst quenched with royal blood, Archaon was able to sheath it and return from the plateau to the cheers of his followers.[1c]

Now Archaon carries the blade with him into battle. Although the blade is potent enough already, he can unleash the power of U'zuhl to become a lethal killing machine - although sometimes it will try to attack him or his companions in its fury. Once U'zuhl has been unleashed it cannot be rebound until the end of the battle.[1d]

Forged before the dawn of man, the Crown of Domination once held the Eye of Sheerian, but had been lost to history. It strikes terror into the bearer's foes and gives strength to his allies.[1c][1d]

Decades after finding the Slayer of Kings, Archaon still had no clue as to the whereabouts of this ancient battle-helm. Eventually Be'lakor revealed its location, planning to steal the crown after Archaon found it.[1c]

The crown lay in the First Shrine to Chaos, high on an icy peak in the Worlds Edge Mountains. Be'lakor led Archaon up the mountain, the Steed of the Apocalypse carrying him over the most difficult terrain. After a day and a half Archaon stood before the massive double gate that was the entrance to the Shrine.[1c]

Through the gateway was a labyrinth filled with dire beasts and vengeful Daemons. Archaon was tested by each of the Chaos Gods to see if he was worthy to be the Everchosen. Nurgle sent deadly diseases that Archaon fought off with sheer willpower. Tzeentch created a labyrinth of crystal, but Archaon blindfolded himself and used instinct alone to negotiate it. Slaanesh sent temptation after temptation, but Archaon resisted, never diverting from the path to the inner gates of the Shrine.[1c]

After passing through the inner gates, Archaon found himself on a narrow causeway surrounded with hellfire that scorched his skin and burnt away his hair. Suddenly, a mighty Bloodthirster of Khorne erupted from the flames and attacked the potential Everchosen. The Greater Daemon was strong, but Archaon drew strength from the Slayer of Kings and wrested the Bloodthirster's weapons away and strangled it with its own whip.[1c]

The hellfire died away, leaving Archaon standing in a simple shrine. A throne stood at the back of the shrine, with a withered corpse sitting on it. On the top of its withered skull sat the Crown of Domination. Archaon took the crown and, with his wounds healing and frame swelling with power, he held it to the heavens. After over a century of searching, he had claimed the title of Everchosen. All that he needed now was a coronation[1c]