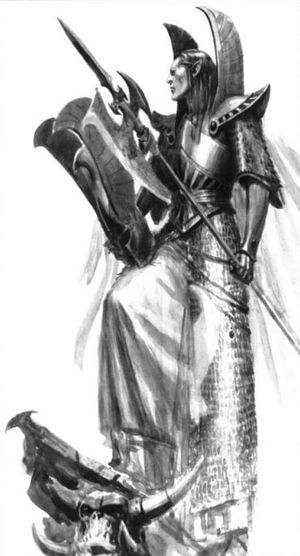 Caradryan, Captain of the Phoenix Guard

Caradryan is the Captain of the Phoenix Guard - the chosen of the god Asuryan, and became the living Incarnate of Fire during the End Times.[1b]

In his youth Caradryan made a pilgrimage to the Shrine of Asuryan, a task which all High Elf nobles are expected to do at least once in their lives. However, unlike other nobles, Caradryan had the arrogance to enter the holy Chamber of Days. No-one knows what he witnessed there, but when he emerged he had the glowing rune of Asuryan marked upon his forehead. The changed Elf abandoned his worldly possessions and took the vows of the Phoenix Guard that very day.[1b][2a]

The Frostheart Phoenix Ashtari is bonded to Caradryan, something that formed in his early years of service at the Battle of Finuval Plain when Ashtari challenged the Black Dragon Korzarander. Outmatched by the Dragon, only the intervention of Caradryan saved his life. [3a]

Caradryan's days are now spent meditating in the Chamber of Days, reading the fiery letters that spell out the past, present and future. Over the years he became more and more in-tune with the thoughts of Asuryan himself, until in the 221st year of the reign of Finubar the Seafarer (2384 IC) he was named as the new Captain of the Phoenix Guard. The previous Captain, Moraelir, willingly stepped aside in accordance with the will of Asuryan.[1a][1b]