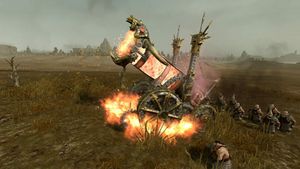 A Hellcannon of Chaos is a twisted war machine of iron, brass and daemon, forged in the volcanic furnaces of the Chaos Dwarfs. This gigantic construction is therefore fully sentient and has to be chained to the ground and guarded by a crew of Chaos Dwarfs, lest it destroy everything it encounters.[1][2]

This construct's ammunition are the bodies of recently killed, unceremoniously shovelled by the crew into the rear furnace of the cannon. The latter burns with daemonic flame, melting the victims' flesh into hissing, wax-like substance, and disintegrating their souls, twisting their essence into bolts of pure power and change, vomiting them into the enemy's ranks with the accuracy far beyond anything a mortal can manage. When the bolt hits the ground, the incandescent explosion occurs, powerful enough to liquefy anything that used to stand there, be it a mighty Dragon or a formidable castle wall. Even the weathered soldiers can break ranks and flee from this terrifying proof of the power of Chaos.[1] The crackling blasts of raw energy they shoot transmute anything it touches into freakish new forms and sending any survivors running in fear.[2]

The soldiers stalwart enough to try and attack the Hellcannon, will likely find it free from its chains and racing forward to attack them, the Chaos Dwarfs letting it break free to feed itself on their flesh. They are more than justified here: their creation has been expertly forged by the finest smiths of Zharr-Naggrund (and thus almost indestructible), and is bone-shatteringly heavy. Once it is in the thick of fighting, it can also spew the ichor of half-melted flesh and daemonic power, spelling death for any kind of Warhammer troop. Finally, the Dawi Zharr handlers are capable fighters themselves.[1][2]

Their skills, however, are unlikely to save them from the creature they are meant to handle. The Hellcannon is still a wild and unpredictable construct and issues with it have ranged from predictable assault on the handlers to the mighty furnace downdrafts literally sucking unlucky handlers in! The cannons have also been known to shake themselves apart against the chains or even somehow taint the Winds of Magic to make them truly lethal for anyone hoping to use them.[1]

Nevertheless, they are more than powerful enough to be worth making and so there are rumours of the entire batteries of Hellcannons in existence.[1]