From Warhammer - The Old World - Lexicanum
(Redirected from Wyrdstone)
Jump to: navigation, search 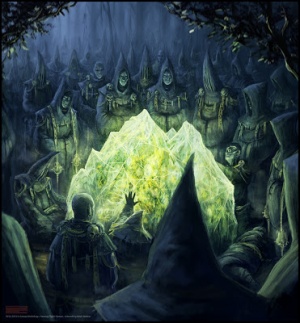 Warpstone, also known as wyrdstone, is solidified Chaos. As the raw stuff of Chaos it is the ultimate magical substance and greatly sought after by the followers of Chaos.

Upon the breakdown of the Old Ones' warp gates, Chaos entered the world in the form of warpstone dust which rained down upon the world, warping many species into monstrous new forms, as well as leaving a far more subtle and insidious mark upon other races. [2a]

Warpstone of more substantial size can also be found throughout the Warhammer world, but especially in the Chaos Wastes and where comets or meteors have fallen to the earth. Warpstone usually takes the form of an irregularly-shaped lump about the size of a man's fist. [2a]

In its solid, unrefined form, warpstone seems to swallow all light around it, creating a small patch of darkness around it. It also radiates a deadly and corrupting energy; creatures suffering prolonged exposure eventually die or become warped by mutation, although this may not affect the Skaven, as many of them wield weapons and talismans containing unrefined warpstone with no obvious dangerous and corrupting effects (although it may explain their backstabbing and egotistical nature). [2a]

Warpstone can be refined by Skaven Grey Seers into a grey powder, allowing it to be used in more controlled ways. [2a] While the Skaven use and rely on warpstone, the use and possession of warpstone is strictly forbidden in any civilized human society like The Empire. Nevertheless after the destruction of the city of Mordheim by a comet of warpstone, adventurers throughout the Old World flocked to the ruins in hopes of finding the dangerous but precious fragments of the comet.

Dark magic can coalesce into warpstone and throughout history, comets of warpstone have fallen to the earth, the largest often creating vast craters suffused with corrupting magical energy and the skaven are said to be able call down meteors showers. [2a] The best known of these include:

The Skaven make many and varied items with Warpstone or are powered by it, these include: