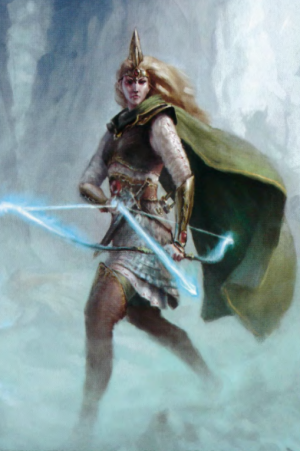 The Sisters of Avelorn are the personal guardians and hand-maidens of the Kingdom of Avelorn and the Everqueen herself. [1a]

There are regions of Avelorn that the citizen levies are forbidden to enter. Some are sacred places of power, intrinsically linked with the rites of renewal by which the Everqueen are helps sustain Ulthuan and its people. Others are dark and dangerous, places from which the touch of Chaos never truly faded. It is the duty of the Sisters of Avelorn to watch over such places; to ensure that the sacred lands remain sacrosanct, and that the beasts who dwell in the tainted reaches stray not -- or are swiftly slain if they do.[1a]

Sisters of Avelorn are keen-eyed archers, Elf-maids chosen from the ranks of the citizen levy by the Everqueen's personal decree. By tradition, only the most gifted are welcomed into the Sisters of Avelorn for, just as the Everqueen embodies all that is ideal and unblemished in the Elven race, so too must her chosen guardians aspire to perfection; not only in mind and body, but also in pursuit of the spiritual. Such serves to raise the warriors of this maiden guard above the petty iniquities that so often pervade the Everqueen's court, ensuring that they remain incorruptible.[1a]

The Sisters of Avelorn prefer to fight their battles at range, as their weapons do not fire ordinary arrows, but mystical bolts of white-blue flame that set tainted flesh afire. Yet the Sisters shirk not from close quarters battle, for no battlefield peril can overcome one who walks the dark paths of Avelorn. Against charging knights, rampaging Daemons, or an entire coteries of Khainite Assassins with cruel murder in their hearts, the warrior-maids stand their ground. With precise aim and steady hearts, they loose arrows until the foe is full upon them, then draw their swords and step into the fray.[1a]