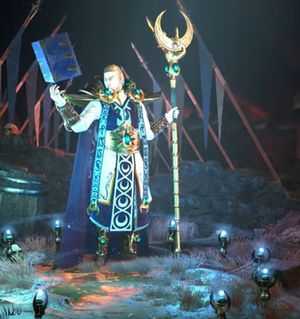 He was born into a rich and powerful family and was always destined to become a mage at the Tower of Hoeth and although his power came quickly to him, so did pride and arrogance. [1]

A rivalry with another student led to a magical duel which saw not only the rival kileld but a teacher crippled. As punishment he was banished from Ulthuan until he had atoned for his crimes, leaving to explore the Old World with little more than the clothes he was wearing and a few tomes. [1]

Initial reports of the Chaos invasion was of little interest - the Elves had been fighting Chaos for thousands of years but when he learnt that Teclis himself had travelled to lend aid to the human, Elontir moved to join the Imperial army. Magnus was quick to gain the aid of another powerful mage. [1]

Determined to prove himself, Elontir fought Chaos Sorcerers and Daemons alike and although Magnus offered him a place of honour in his retinue, Elontor looked towards Teclis for a sign his exile was at an end. [1]