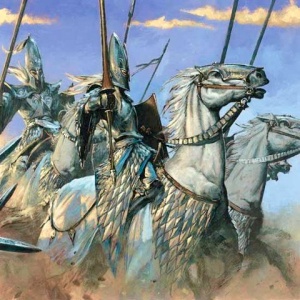 Silver Helms are lords and lesser nobility who ride to battle on white, silver or dappled horses and have magnificent tall helmits. [3a]

The elf word for knight is Ithiltaen which means Silver Helm. [5a]

Of all the High Elf knights, it is the Silver Helms who are seen as the perfect exemplars of martial grace and valor to which young Elves should aspire. Dragon Princes are too distant and aloof, Ellyrian Reavers perhaps a touch too wild and uncivilized; Silver Helms are proud without being haughty, and brave without being undisciplined. Thus, Ulthuan's legends more often center around the deeds of its Silver Helms than any other warriors within the ten realms.[1a]

Where the ranks of archers and spear regiments are drawn from the citizenry of Ulthuan, the Silver Helms are recruited purely from families of noble blood. Whilst such a calling is not compulsory, few amongst the nobility are prepared to invite dishounor by not fulfilling their duty. Furthermore, service as a Silver Helm is often considered the finest way for a noble to prove himself as warrior and leader both.[1a]

A Silver Helm's first lessons drive out his desire for individual glory and personal renown, replacing it with a pride that stems from his regiment's deeds. As his training progresses, he learns to more fully master his steed. A Silver Helm must ride unflinchingly into the din of battle, and his horse must bear him thence without hesitation or spoken command, trampling foes that block the path. There are few more glorious sights in all of Ulthuan than when a regiment of Silver Helms dips its lances and charges into the fray.[1a]

The Silver Helms are willing to throw themselves into the most dangerous of battles. They do so in the understanding that glory awaits those who prevail, and they are arrogant enough to believe they can succeed, no matter the odds. For these young nobles, there can be no hesitation in facing any foe -- it is those victories that are hardest won which bring about the sweetest glories and earn the grandest renown.[1a]

All Silver Helms wear the traditional Ithilmar helms that set them apart from other Elven knights. Status in the Silver Helm regiments is denoted by the decoration and ornamentation that is added to the helm over the years. Thus a warrior who has shown particular valor, or bested a dangerous foe in battle might adorn his helm with silken ribbons that flow behind him as he rides, while a knight who has slain a Daemon could have the icon of the burning sun, set with a single red gemstone on his. There is a decoration for almost every martial feat imaginable, and veteran Silver Helms often have incredibly ornate and impressive headgear.[2a]

Of all the decorations that the Silver Helms prefer, only those who have served as the champion of a Silver Helm regiment, known as the High Helm, may wear the feathers of an Eagle on his helm. Such embellishment symbolizes great skill and is the mark of a born leader.[2a]

Though all Silver Helms vie for the right to wear the Eagle feathers of the High Helm, it is a role fraught with peril. A High Helm is expected to fearlessly seek out the champions and leaders among the enemy and slay them, no matter how dreadful they may be.[2a]